This is supposedly the year 3D television becomes the hot new thing: Updated sets and disc players are coming out, and 3D cable channels are in the works. But it’s not clear the idea will reach out and grab mainstream viewers.

Besides having to spring for expensive new TVs, people would have to put on awkward special glasses to give the picture the illusion of depth. That limits 3D viewing to times when viewers can sit down and focus on a movie or show.

It’s one thing to put on 3D glasses in a theater, but “at home, you’re with other people in the living room, running to the kitchen and doing other things,” said Greg Ireland of the research firm IDC.

Unfazed by the potential hang-ups, the biggest TV makers began revealing their 3-D models Wednesday before the official opening of the International Consumer Electronics Show in Las Vegas.

Tim Baxter, president of Samsung Electronics Co.’s consumer division, said in an interview that 10 to 14 percent of the roughly 35 million TVs sold in the U.S. this year will be 3-D-capable. 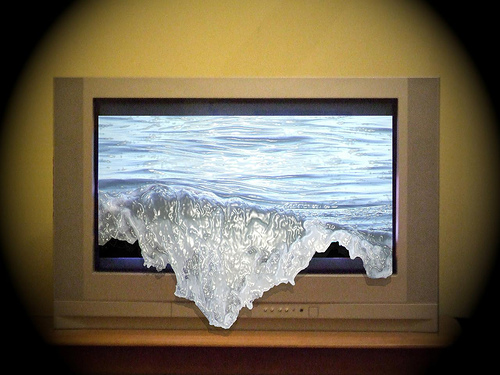 Samsung is determined to make 3D a big feature on its more expensive TVs this year. It’s teaming with DreamWorks Animation SKG Inc. to make the Blu-ray 3-D version of the movie “Monsters vs. Aliens” an exclusive for buyers of Samsung’s 3-D TVs.

LG Electronics Inc. said it will introduce 47-inch and 55-inch flat-panel TVs with 3-D capabilities in May. LG and Samsung are among the companies that plan to sell 3-D Blu-ray disc players later in the year.

Manufacturers aren’t counting on 3-D to take over instantly. Color TV and high definition caught on over many years. Like those earlier advances, 3-D programming requires upgrades throughout the TV and movie infrastructure, from shooting to editing to distribution. Incidentally, Samsung and Dreamworks are working with Technicolor, which pioneered color movies, to get 3-D right.

Of course, movies in 3-D have been around since the 1950s and from time to time have been billed as the next big thing in entertainment. And technically speaking, 3-D viewing in the home has been possible for the past few years. But there has been no good way to get 3-D movies and shows to watch.

That obstacle is being swept away this year, as plans for a 3-D version of the Blu-ray disc have solidified. Players are expected this spring. On Tuesday, two major cable networks — ESPN and Discovery — said they plan to start beaming 3-D entertainment into homes for the first time. 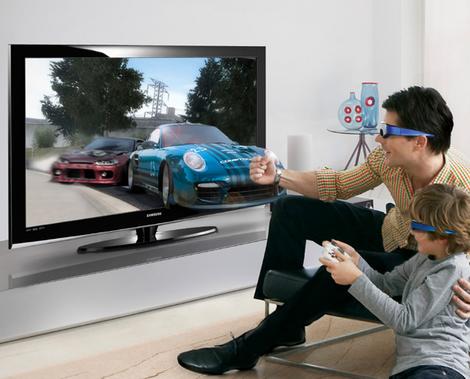 ESPN plans to have its channel running in time to show World Cup soccer matches in 3-D on June 11. Discovery Communications Inc. will partner with Imax Corp. and Sony to bring out its own full-time 3-D network in 2011.

Samsung isn’t waiting for 3-D programming: It said its sets will be able to convert standard 2-D programming to 3-D on the fly. The effect likely won’t be as good as original 3-D footage, but it will “tide consumers over” until there is more 3D TV programming, Baxter said.

Toshiba is taking the same tack. It plans roll out a new line of five TVs this year that will perform the 2-D to 3-D conversion in a separate box with a powerful processor similar to one used in the Sony PlayStation 3. Like the other manufacturers, Toshiba didn’t announce prices for the sets, but they will probably be expensive.

TV manufacturers, movie studios and broadcasters are counting on the excitement around the latest wave of 3-D movies in theaters to finally drive interest in adapting the technology for the home. In particular, James Cameron’s “Avatar” has set a new standard for 3-D in movies and has surpassed $1 billion at the box office. It demonstrates that 3D TV is viable for more than just computer-animated children’s or family movies such as “Cloudy with a Chance of Meatballs.”

“The hopes of the industry have undoubtedly been raised by the success of `Avatar,'” said NPD analyst Ross Rubin.

But it’s not clear people will be eager to pony up the premium prices for 3-D in the home — at least for a few years — or even that the experience will translate well from the movie theater to the living room. (It is possible to do 3-D TV without glasses, but those solutions usually require viewers to keep their heads in one particular place. The image quality is also lower.)

Viewing 3D TV discs will require new Blu-ray players that could cost a few hundred dollars, to the possible annoyance of people who invested in regular Blu-ray players in the past several years. And it may be difficult to tempt shoppers to buy new TVs after the flat-panel binge of the last few years.

Jay Weil, 42, a day trader from San Francisco, said he’s unlikely to jump in to buy 3-D technology right away because he bought a new 52-inch, high-definition TV about six months ago for $1,800. He has no problems with the setup.

“I’m not suffering, even though it’s 2-D,” he said Wednesday inside a Best Buy store in San Francisco.

Analyst Riddhi Patel at iSuppli Corp. said one target market would probably be people who have moved the flat panels they bought a few years ago into their bedrooms and now want new sets for their living rooms.

Or TV makers can count on hitting the mainstream later and aim for enthusiasts first — people such as Michael Pearce, 39, a supervisor at a biotechnology company.

Pearce loves the thrill of new electronics even though his family tells him he’s gone overboard. He says he has bought 12 flat-screen TVs in the last three years and sells the old ones on eBay whenever he upgrades.

“I like to see how they push the envelope. I like to see what’s next,” he said. “Three-D TV is like, wow. You have to go to the movies for that.”