Scientists around the world genuinely fear the catastrophic consequences of volcanic activity. Many still remember traffic jams in Europe, caused by the April eruption of Eyyafyatlayokudlya.

In August, two international expeditions for volcanoes studying were launched.
Russian and American researchers went to the peak Sarychev, located on the Kamchatka Peninsula (where, incidentally, yesterday the Day of volcano was officially celebrated).
A little later, French expedition to the island of Ambrym (Vanuatu) was started.

Scientists from the University of Strasbourg are particularly concerned with Benbow Volcano. They believe that the basalt wall that separates the volcano from the ocean, sooner or later would succumb to the pressure.
And then a powerful explosion that will surpass even the infamous eruption of the Indonesian volcano Krakatau will take place and destroy the island.
In this case, a natural disaster can affect even Australia and Indonesia. 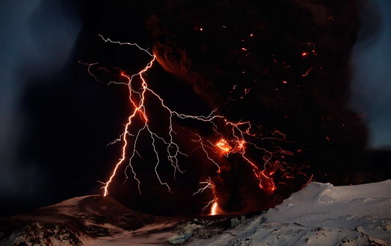 In addition, new scientific expeditions are ready to start in the near future to study other particularly dangerous volcanic zones, including northern and southern Europe (Iceland and Italy), Africa and the Caribbean.

There is a reason why developed countries allocate additional funds for such studies. People want to predict outbreaks of volcanic activity not only for the sake of companies’ profits, but also because the lives of entire peoples depend on these forecasts.

There are some grounds for concerns. History has many examples where volcanic eruptions ended with the death of hundreds of thousands of people and even entire civilizations.
The threat of eruptions affects even those who live far away from volcanoes. Moreover, frequent loss of life occurs not because of the lava flows, but emissions of toxic gases and tsunami that accompany eruptions.

Only Iceland alone has seven active volcanoes, and Italy has three.
In the past, they killed tens of thousands of residents. Especially notorious are volcanoes Vesuvius and Etna, which destroyed entire cities in ancient times.

Eruption of Santorini volcano in the Mediterranean in 1400 BC can be considered the most impressive example from ancient history. Volcanologists say that it exceeded the capacity of a million nuclear bombs dropped on Hiroshima. This was the eruption that caused the collapse of the Crete-Mycenaean (Minoan) civilization. It also dealt a fatal blow to civilizations around the Mediterranean Sea.
Some of the ancient historians believed that it was Santorini that has caused the destruction of Atlantis. 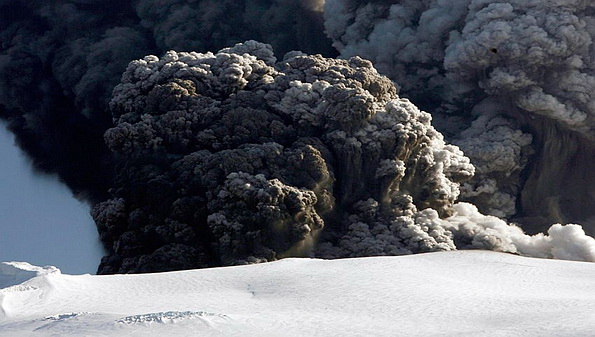 Later there were less ambitious, but terrible in their consequences eruption of Vesuvius and Etna in Italy, which destroyed entire cities like Pompeii and Catania.
Similar examples were demonstrated by other “volcanic areas” of the world. For example, the eruption of volcanic ridge Lucky in Iceland in 1783 almost ruined the entire country.

Then poisonous gases emitted into the atmosphere killed over a third of the 50 thousand of the population, while the rest nearly died of starvation that has engulfed Iceland after the death of livestock, crops and fish. 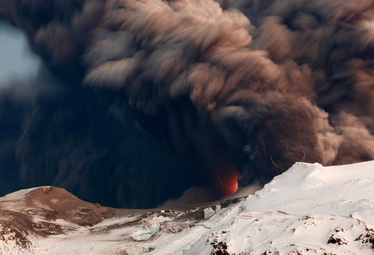 In May of 1902, as a result of volcanic eruptions of Mont Pele and Soufriere, the islands of Martinique and St. Vincent (Antilles) almost completely lost their 60-thousand population to air poisoning.
In 1883, during a volcanic eruption on the Indonesian island of Krakatoa, at least 36 thousand people have been killed. Tens of thousands died in subsequent years due to the effects of the eruption.
For example, on the shores of the Sunda Strait nearly all fertile soil was washed away by giant waves that accompanied the eruption.

There is another point. Volcanic activity affects the climate of the entire earth. After all, the dust in the most powerful eruptions is transported into the stratosphere, reflecting the sun’s rays reaching back into space, thus depriving a large part of the Earth of heat. As a result, for years on end global cooling occurs, which causes very severe winters.

A typical example is a powerful explosion of the Tambora volcano in 1815 in Indonesia, which led to the death of Sumbawa Island, as well as 100 thousand people. In addition, because of dust and gases during the eruption, the year 1816 in northern Europe and eastern North America went down in history as the “year without summer.” Global temperatures dropped by almost one degree Celsius.
Then the winter snow melted in June and in August freezing began. It resulted in crop failures and famine.

The eruption of Eyyafyatlayokudlya proved a complete lack of protection of civilization in the face of disaster. People still depend on the nature, and the old euphoria that humans can control the nature is the apparent overestimation of power. At least, we are still very far from that.

Fortunately, according to volcanologists, eruptions like those that occurred in Krakatau and Sumbawa, occur once or twice a century. Global volcanic disasters like Santorini occur once in every three to four thousand years. But no one can guarantee that a disaster will not happen in the near future.