Samsung and Panasonic will start selling 3-D TVs in U.S. stores this week, inaugurating what manufacturers hope is the era of 3-D viewing in the living room. But because the sets require bulky glasses, and there is for now little to watch in the enhanced format, it will take at least a few years for the technology to become mainstream, if that happens at all.

Samsung Electronics Co. announced Tuesday that it is selling two 3-D sets this week. For $3,000, buyers get a 46-inch set, two pairs of glasses and a 3-D Blu-ray player.
Want to be the first one on your block with a 3-D television? It will cost you about $3,000.

The sales debut comes as moviegoers have shown considerable enthusiasm for the latest wave of 3-D titles in the theater. Last weekend, “Alice in Wonderland” grossed an estimated $116.2 million at the box office, beating the first-weekend receipts of “Avatar,” the winter’s 3-D blockbuster. 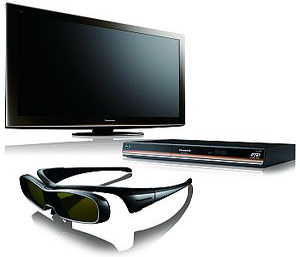 Although it’s clear that 3-D sets for the home will appeal to technology and home-theater enthusiasts, it remains to be seen whether other consumers will be enticed to spend at least $500 above the price of a comparably sized standard TV and Blu-ray player.

TV makers hope so, because sets with the last big technological improvement — high definition — have come way down in price, below $500.

One challenge will be that the 3-D effect requires viewers to wear relatively bulky battery-operated glasses that need to be recharged occasionally. They are not like the cheap throwaways that have been used in theaters since the 1950s.

When you’re wearing these 3-D TV glasses, room lights and computer screens may look like they’re flickering, making it difficult to combine 3-D viewing with other household activities. Anyone who’s not wearing the glasses when the set is in 3-D mode will see a blurry screen. (The sets can be used in 2-D mode as well, with no glasses required.)

To give buyers something to watch, Samsung is including a 3-D copy of “Monsters vs. Aliens” on Blu-ray disc with its packages, in a deal with the studio, DreamWorks Animation SKG Inc. Its CEO, Jeffrey Katzenberg, said it will convert its “Shrek” movies to 3-D for Samsung TV buyers later this year.

We continue to see this amazing level of enthusiasm and excitement for 3-D. The rate of adoption for this into the cinema has been a rocket ship these last couple of months.

Sets with 3-D-capability have been available for a few years from Mitsubishi Corp. But 3-D for the home is now coming together as a complete package with the arrival of more 3-D television models, as well as 3-D video players and 3-D movies.

But there’s still a notable lack of 3-D material to watch.

Eventually, sports and other programming that will benefit from a more immersive experience should be offered in 3-D. ESPN has said it will start a channel that will broadcast live events using the technology, starting with FIFA World Cup soccer in June. The sets could also be used for 3-D video games, when game consoles catch up to the new technology.

Samsung, the world’s largest maker of TVs, has high hopes for 3-D. Tim Baxter, head of the company’s U.S. electronics division, said he expects 3-D systems to be in 3 million to 4 million of the 35 million TV sets sold in the U.S. this year by all manufacturers.

Research firm iSuppli Corp. puts the figure at 4.2 million units globally this year. It expects the numbers to ramp quickly, to 12.9 million next year and 27 million in 2012. For comparison, there were more than 210 million TVs sold worldwide year.

Sony Corp. said Tuesday it will start selling 3-D televisions in June. U.S. prices were not revealed, but the sets will cost $3,200 and up in Japan. The company hopes that 10 percent of the TVs it sells in the next fiscal year will be 3-D units.

Sony also plans to issue software upgrades for its PlayStation 3 game consoles and some of its Blu-ray players so they will be able to play 3-D discs.

Panasonic has not revealed what its sets will cost. It’s taking a slightly different tack than Samsung, by introducing 3-D only on plasma screens, for maximum image quality. And rather than selling 3-D sets broadly, it’s going only through Best Buy Inc.’s Magnolia Home Theater stores.

Samsung’s two new sets will be followed by another 13 3-D-capable models in the next two months. Soon, 3-D packages with plasma sets will be available for about $2,000.

ISuppli analyst Randy Lawson said it’s a fairly simple, inexpensive move for manufacturers to modify their high-end sets to be 3-D-capable. That’s part of the reason iSuppli expects a quick increase in sales of such 3-D TVs. Whether people will use the feature is another matter.

Consumers should be more interested in the ability to connect the TV to the Internet, Lawson said. That feature, which started showing up last year, is more immediately useful, because it gives access to a vast array of online movies and TV shows.

I don’t believe that everyone will be watching 3-D all the time in two to three years. I don’t think it will be a predominant concern among average consumers.