Melo-M is a Latvian instrumental cello rock trio consisting of three classically trained cellists: Kārlis Auzāns, Valters Pūce, and Antons Trocjuks. They are cool whether they are being used to play the music of Mozart, Beethoven, Vasks or any other composer dead or living. And they’re also cool when used in nontraditional ways, such as when playing cover versions of Latvian pop and rock hits. That’s what the Rīga-based cello trio called Melo-M does on its debut album, the self-titled Melo-M.
The band performs in a ”classical-crossover” style, using only cellos and drums in pop and rock c ompositions. In this music genre mainly act musicians with academic education, combining academic base or a sound of some instrument with the elements of pop, rock or even folk music.
All groups cellists Karlis Auzans, Valters Puce and Antons Trocjuks are professionally educated musicians and who still are continuing their studies with acknowledged masters of cello. The musicians are united by the idea of unlimited opportunities of classical instrument or academic music in contemporary music and with what Vanesa Mae, Apoccalyptica, Andrea Boccelli and Sarah Brightman have already surprised the world.
There are only few cello bands in the word and Melo-M is the only one in Eastern Europe which in its performances uses only cellos. In their concerts the band widely demonstrates the variety of sound that can be performed with a cello when different compositions of disco, rock, heavy metal, and pop music are played with this music instrument. When played by cello trio these very different music styles obtain new colors and never heard shades that are gorgeously supplemented with eye-catching performance and incomparable charm of cellists themselves. 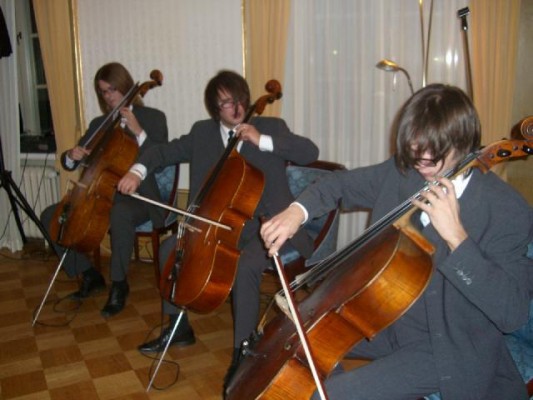