Advent Sunday is the start of the liturgical or church year for many Christians as well as the Christmas season for people in Europe.

Advent is the period of four Sundays and weeks before Christmas (or sometimes from the november to Christmas Day!).

Advent means ‘Coming’ in Latin. This is the coming of Jesus into the world.

Christians use the four Sundays and weeks of Advent to prepare and remember the real meaning of Christmas.

Advent Sunday is the fourth Sunday before Christmas Day. This is equivalent to the Sunday nearest to St. Andrew’s Day, 30 November, and the Sunday following the Feast of Christ the King.

It can fall on any date between 27 November and 3 December.

What is an Advent Wreath?

Many churches and families prominently display an evergreen wreath with four candles throughout the Advent Season.

It is traditionally made of some type or mixture of evergreens (fir, spruce, juniper, holly, etc.), symbolizing the continuation of life in the middle of the cold and dark winter (in the northerly latitudes, at least).

Advent wreaths traditionally include three purple/violet candles and one pink/rose-colored candle, which are arranged evenly around the wreath, although some people use four violet or four white candles.

Advent and particularly the four Sundays before Christmas Day have been a period of preparation for Christmas for many centuries.

More information on the background to these celebrations and observances are given in our general article on the first Sunday in Advent.

What are the liturgical readings for the Sundays of Advent?

Each of the four Sundays of Advent has its own special readings and characteristics:

Advent is one of the few Christian festivals that can be observed in the home as well as at church. In its association with Christmas, Advent is a natural time to involve children in activities at home that directly connect with worship at church.

In the home an Advent wreath is often placed on the dining table and the candles lighted at meals, with Scripture readings preceding the lighting of the candles, especially on Sunday.

A new candle is lighted each Sunday during the four weeks, and then the same candles are lighted each meal during the week. In this context, it provides the opportunity for family devotion and prayer together, and helps teach the Faith to children, especially if they are involved in reading the daily Scriptures. 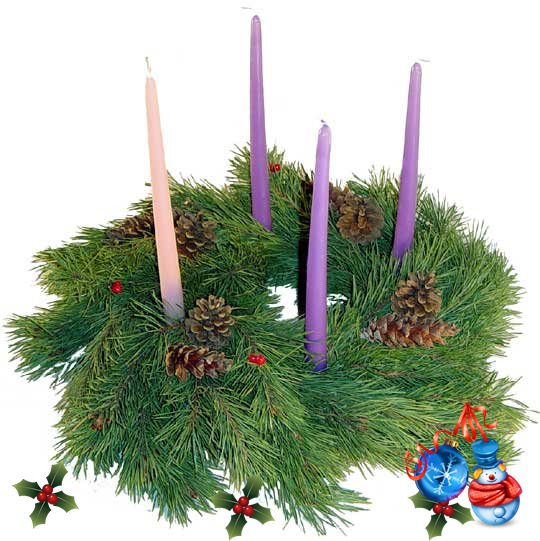