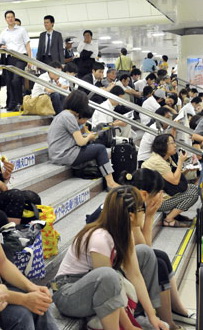 The focus of the quake, which occurred at 05:07 a.m. (2007 GMT),was located some 23 km under the sea in Suruga Bay, southwest of Tokyo, said the agency, which estimated a preliminary magnitude of6.6 for the quake and the depth of the focus at 20 km under the sea surface.
Tsunami alerts, which were issued shortly after the quake, have been called off.
There were no immediate reports of casualties or damage to properties.
A task force was set up at the prime minister’s office, and Prime Minister Taro Aso ordered task force members to collect information on the quake.
In Omaezaki, Shizuoka Prefecture, two nuclear reactors at the Hamaoka nuclear plant were suspended urgently. And Central Japan Railway Co. has suspended operations of Shinkansen bullet trains and local trains in Shizuoka and part of Nagano Prefecture.
The surface of the road was lifted up at the Kikugawa interchange on the expressway in Shizuoka Prefecture, local media reported, citing the police. And there were also reports of landslides in the Prefecture.