An Icelandic volcano neighbouring Eyjafjoell, whose eruptions paralysed Europe’s skies last month, could come to life in the near future, according to experts.

“An eruption in the short term is a strong possibility,” experts said, referring to Katla, which is larger and fiercer than Eyjafjoell, in a report from the University College London (UCL) institute for risk and disaster reduction.

The report warned that “future moderately to highly explosive Icelandic eruptions combined with appropriate weather conditions are highly likely to cause a repeat of the recent air transport disruption.”

The Eyjafjoell volcano began erupting on April 14, and spewed out an ash cloud that drifted over Europe and led to massive flight disruption throughout the continent for several days. 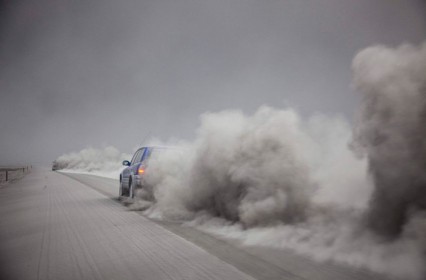 It caused the biggest airspace shutdown in Europe since World War II, affecting more than 100,000 flights and eight million passengers.

The UCL experts — encompassing scientists, engineers and statisticians also criticised the response to the eruption.

“The severe disruption to European airspace in April from (the volcano’s) ash clouds reflect a lack of integration between the monitoring, warning and risk management systems,” said Carina Fearnley, of UCL’s hazard research centre.

In a second report released Thursday, a team of British researchers said they had discovered a significant electrical charge in the ash plume.

The scientists, from the Institute of Physics, said they found that “the ash plume which hovered over Scotland carried a significant and self-renewing electric charge.”

They warned that the charge could pose a risk to both planes and passengers.

“Charged particles can cause aircraft radio interference and, if introduced into aircraft cabins, charged ash may present an electrostatic hazard to occupants or aircraft systems,” said the report.

The scientists used a specialist weather balloon to conduct research on a section of the ash cloud floating over Scotland.

With the power of mind.

The error has been reported – Windows 7