Now we have the talking iPod Shuffle that Apple announced Wednesday. It is closer to a tie clasp and holds roughly 1,000 songs.
Play, pause and volume controls are located in a small remote on the right earbud cord.
The lack of a screen is a shortcoming of all Shuffles. It’s amazing how often I have no idea what I’m listening to even from my own collection. But a ballyhooed new VoiceOver feature that reads aloud the names of tracks, artists and playlists helps compensate, even if it’s in a cadence-challenged robotic voice. The voice feature is available in 14 languages. It also tells you when battery levels are low.
It’s hard not to be seduced by a player so tantalizingly tiny. Apple’s claim for this latest Shuffle is the same as the last — that it’s the smallest music player in the world. This time around, it is nearly half the size of its predecessor. It’s made of anodized aluminum, weighs well under a half-ounce and measures a mere 0.70 x 1.8 x 0.3 inches.
Though Apple’s previous Shuffles were relative dwarfs, too, the units practically screamed “notice me.” They came in a variety of bold colors. The new 4-gigabyte flash memory Shuffle — it comes in black or silver — is almost muted by comparison. On the back is a shiny stainless steel clip with the Apple logo that lets you wear it on a lapel, shirt pocket or belt buckle. Or you can bury it in your pocket. Previous Shuffles were also wearable.
Apple is keeping the prior generation 1-GB Shuffle, now $49, in the lineup; a 2-GB $69 version goes away.
As Apple is proving, thinking small is a really big idea. 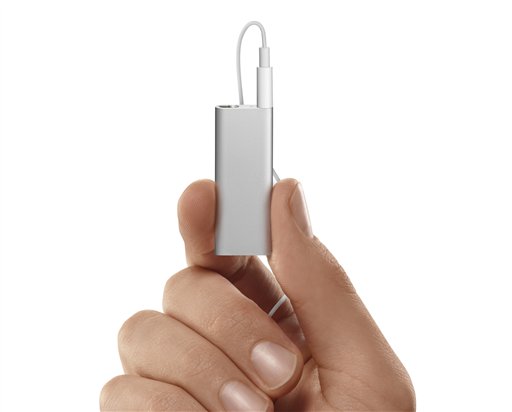