Two U.S. astronauts have finished a 6 1/2 hour spacewalk to install a Global Positioning Satellite antenna on the Japanese Kibo laboratory in efforts to complete the International Space Station, NASA said Sunday.
Astronauts Steve Swanson and Joseph Acaba finished the mission’s second spacewalk late on Thursday, placing a second GPS antenna on the Kibo lab that will be used by Japan’s HTV unmanned cargo ship during its debut flight in September, NASA said.
During the first spacewalk of the mission on Thursday, Swanson and his partner Richard Arnold installed the last set of solar wings on the ISS to bring the total number of solar panels to eight.
The solar array will provide the electricity to fully power scientific experiments and support the station’s expanded crew when it is increased to six in May.
The third spacewalk for the current Discovery mission is planned for March 23.
The Discovery lifted off from Florida’s Cape Canaveral on Monday and docked with the ISS at 17:20 EDT on Wednesday (21:20 GMT Tuesday).
The shuttle delivered a crew of seven to the ISS, including Japanese Aerospace Exploration Agency astronaut Koichi Wakata, and also brought with it the space station’s fourth and final set of solar panels.
Wakata, the ISS’s first long-duration Japanese resident, replaced U.S. astronaut Sandra Magnus, who will return to Earth on Discovery after more than four months aboard the space station. The Japanese astronaut is scheduled to return to Earth during the next shuttle mission, STS-127, scheduled for June 2009.
NASA is planning to wrap up the current Discovery mission on March 25 and the shuttle is scheduled to land on March 28 at 13:42 EDT (17.42 GMT). 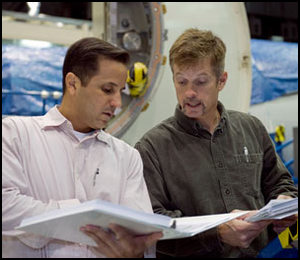