Every story eventually gets mythologized, especially when it comes to the history of popular music groups and performers. The history of the most popular band of all times The Beatles also became a subject of this mandatory mythologizing.

Here’s an example of one such myth. Many sources on the Internet claim that Beatlemania started on September 16-17, 1963.

They claim it was precisely when the first recording of songs of the famous Fab Four was created.

This happened in the U.S. at the recording studio owned by Swan label. This record, according to researchers, became the launching of the careers of the musicians, and opened a New Age of Beatles in the pop culture.

Their truly first recording was made in 1961 at the Hamburg studio Polydor. The album was called My Bonnie, but its release at that time went unnoticed. Although at the time they called themselves The Beat Brothers.

The band recorded their first single Love Me Do under the familiar name in September 1962 at the EMI studio (the single was released on October 5, and immediately reached the 17th place in the music magazine Record Retailer, which is not bad for a debut).

By September 1963, The Beatles released four singles, two mini-albums and one full album in Britain at the label Parlophone, owned by the giant of the recording industry EMI.

The very first edition of the Beatles songs in the United States was released by Chicago-based Vee Jay in early 1963.

The songs Please Please Me and From Me To You, as well as the album Introducing The Beatles were not successful and did not get even into the regional charts.

The most interesting fact is that the September single She Loves You (Swan) was not even noticed in the U.S.

The first wave of Beatlemania swept across America only in December of 1963, when Capitol released I Want To Hold Your Hand. The official start of Beatlemania, according to many historians of the band, is the concert of the Fab Four in London Palladium, held on October 13, 1963.

The event was broadcast in the program Sunday Night At The London Palladium for entire Britain.

Although the program attracted 15 million television viewers, thousands of young fans and admirers have preferred to skip the TV show and filled the streets adjacent to the building of the concert hall, hoping to see the musicians in real life.

After the concert, the band had to wade to the car surrounded by a police patrol – an event very, very rare in those years. Even Elvis Presley was not “torn to pieces” in his time.

What causes such mythologization of the history of the Beatles? Probably, the attempts to somehow explain the phenomenon of their extraordinary popularity. However, the authors of all the myths are making the same fundamental error – they believe that such a complex and multifaceted thing as popularity may be the result of only one event. It is not true.

But once we are talking about the secret of the popularity of the Beatles, it should be noted that the puzzle is yet to be solved. Hundreds of contemporary musicians and producers are trying to do it as everyone wants to become as popular as The Beatle used to be (and still remain to this day). But no one has become the new Beatles. 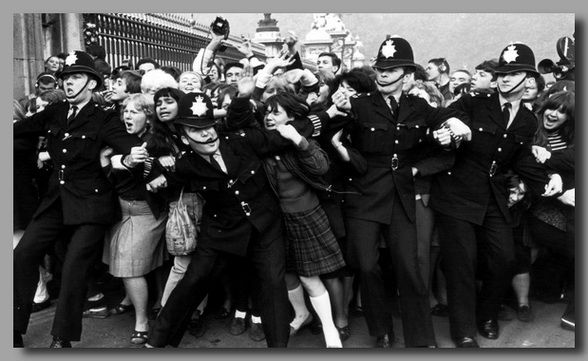 Those who have been studying the phenomenon of The Beatles usually say that their success is explained by the simplicity and openness of songs performed by the Fab Four.

Four guys “from the people”who were not professional musicians were able to become close to millions of listeners because the music was understood by ordinary people.

It is difficult to disagree with this statement if we talk about the earlier albums of the band. But in Britain in the late 1950s – early 1960s there were dozens of bands playing similar music, and The Beatles are the only band known around the world. Why were they the only ones to become super popular?

Some believe that the phenomenon of The Beatles was not created by the musicians but their manager Brian Epstein and producer George Martin.

However, it is unlikely. Epstein, according to people who knew him personally, was a very mediocre organizer and businessman. In addition, it is known that he never interfered with the work of the Fab Four. Same with George Martin.

Others believe that the reason for the success of The Beatles was not their music, but topical and original lyrics. However, the early releases are not very original (at the time, almost everyone was singing about love, rhyming “yesterday” and “far away”).

The Beatles started creating truly unique lyrics much later, when the popularity of the band has already reached its peak.

Most interestingly, The Beatles never tried to appease the tastes and preferences of the public and be fashionable. They preferred to do what they liked themselves. Perhaps here lies the secret of their phenomenal success, and also the fact that they always liked to experiment.

The tunes of even the earliest songs were astonishingly unconventional. The Beatles felt there was not enough room for them within the frame of “classic” rock-n-roll, and they kept trying to remake creating their own rhythm, harmony and tone.

That caused a strange effect where the song turned out both “common” and at the same time unique. As a result, even in the first albums you will not find two similar compositions.

The same happened with the lyrics. Lennon, McCartney and Harrison seemed to be writing about things everyone knows of, but always put some hidden extra subtext in their poetry.

The result was a song that you wanted to listen to time and again, discovering something new every time. Such works of art never get old.

As a result, the Fab Four created their own, unique and original world of The Beatles. In this world there were wonderful things, people lived in “nowhere,” yellow submarines were abundant, guitars were crying, and octopus invited you to its garden, Lucy soared into the heavens, and so on.

This magical space was open to anyone who wanted to visit.

There were many those willing, because people were tired of war ruins and everyday burdens of life, and wanted to find themselves in the sweet and gentle tale for a moment. This tale was offered by The Beatles to the fans (it was offered, not imposed).

But nothing lasts forever. Over time, the members of the band got bored of the “fairy tale,” and The Beatles ceased to exist.

But the magical world they created seems to have remained attractive for the fans of modern pop music.

When in 2004 Rolling Stone magazine published a list of top 500 songs of all time, it included 23 songs of the legendary Fab Four.

It is unlikely that the musicians would be able to create their own magical world.

If they have not tried to remain true to themselves. Then, probably after 1-2 popular albums and dozens of concerts people would have completely lost interest in their work (except, perhaps, a couple of hundred loyal fans). The saddest thing is that most modern pop artists do just that.

As a result, the popularity of the Beatles has not been surpassed by anyone.