BlackBerry 9630 Niagara,
the upcoming RIM’s smartphone, has got some images leaked before its official release. Here are some comparison images and a video of the Niagara by CrackBerry.
The physical dimensions of the 9630 Niagara fall between the 8900 and the Bold. The design of the Niagara also borrows some from of the current models. Under the hood, the Niagara has the processor and the radios that match what the Storm has, and it also features a 3.2 megapixel camera. The Niagara has size smaller than the bold, where the width has been reduced by roughly a quarter inch, but the keyboard is still maintained with the same size. Other features that can be expected on the the 9630 Niagara are a 480 by 360 pixel display, matching the Curve 8900, with GPS and EVDO support. The handset is likely to ride on CDMA-based 3G networks, which is either on Sprint or Verizon. 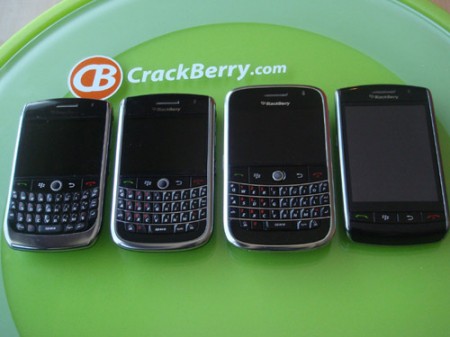