Moscow once again became the heart of the celebrations. A fair where everyone can taste pancakes, honey and hot drinks based on the traditional Russian recipes has opened in the citys center, just meters away from the Red Square. Russians start to enjoy a week-long pancake fest, or Maslenitsa, which comes before Lent and marks the end of winter. Until christening of Russia, Maslenitsa was celebrated on the vernal equinox day. The Orthodox Church, however, timed this holiday to the Lent, in order not to oppose the traditions of the Russian people (in a similar way, Christmas was timed to the winter equinox day). Maslenitsa is amusing and mischievous welcoming of spring, which brings about enlivening of nature and bounty of sunny warmth. From times immemorial people took spring for the beginning of new life and venerated the Sun as giving life and energy to the whole creation. It was in honour of the Sun that they baked flat cakes, and after leavened dough came into use, they started baking pancakes. Open air celebrations were launched all across the country on Monday. Discotheques, Slavic folk games, various competitions will be organized in deferent parts of Moscow throughout the week. But the culmination of the festivities will be a huge pageant on March 1, which, the organizers say, can be compared to the Brazilian carnival. Maslenitsa, also known as Pancake Week, is a Russian religious and folk holiday, a centuries-old tradition with pagan and Orthodox Christian significance. In Slavic mythology its the celebration of the coming end of winter. For Orthodox Christians it marks the last week before Lent, leading up to Easter. The most typical elements of the festivities are bliny – Russian pancakes, which are popularly taken to symbolize the sun, and the traditional mascot – Lady Maslenitsa. At the culmination of the celebration on Sunday evening, Lady Maslenitsa, a straw effigy symbolizing winter, must be burnt. 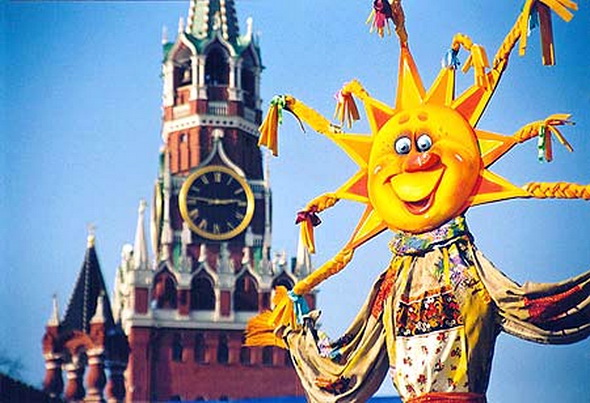