Britain is one of the prime receivers of cocaine in the Old World. That cocaine has gained popularity with the help of celebrities and successful businessmen. Many celebrities use cocaine and do not receive any punishment for it. Moreover, successful entrepreneurs may often look absolutely normal and take high positions in the society despite their addiction to cocaine.

British supermodels Kate Moss and Jodie Kidd would often make headlines because of their fondness for cocaine. Singers Katherine Jenkins and Amy Winehouse publicly stated that they used cocaine.

A cocaine scandal occurred in the British armed forces in 2004, when it was said that the Royal Highland Fusiliers and the Royal Scots took cocaine. 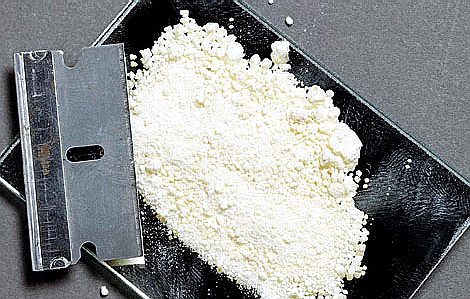 Deputies of the British government believe that the measures, which the government takes to struggle against the import of heavy drugs, are dismally inadequate. The drug is still available in the streets, and the cost of cocaine dropped during the recent ten years from 80 to 40 pounds per one gram.

Cocaine is cheaper than a cup of coffee in a London restaurant, authors of the parliamentary report made to estimate the government’s struggle against the import of heavy drugs in the country said. The price of one done reaches 2 pounds sterling, which means that the price of one gram of cocaine has lost 50 percent of its value during the recent decade.

For comparison, a cup of coffee may cost from two to eight pounds in London. A glass of the cheapest wine or beer costs at least 3.5 pounds.

The price on cocaine could drop against the background of its worsening quality, experts say. The drug may often be mixed with other substances, such as painkillers or even anthelminthic drugs.

The cocaine, which the British police confiscated in 2009, was 27 percent made of the natural product. In other arrested batches, there was only five percent of pure cocaine, K2K reports.

There are other reasons that may have led to dropping prices on the narcotic substance. Prices on illegal substances depend on the risk connected with its delivery, storage and sale. A lower threat of punishment triggers the growth of competition on the market, which eventually results in lower prices.

Great Britain comes second on the use of cocaine in modern-day Europe. The country can proudly take the first place at this point: traces of cocaine were found on 99 percent of the nation’s bank notes.

Three percent of Britain’s adult population tried cocaine in 2008-2009, which marked a five-fold increase in comparison with 1996. Britain is also one of the leaders when it comes to the use of such drugs as ecstasy and amphetamine.

Diabetes basics, as we enter into the summer season