A pioneer style wedding took place in the city of Russia.

The newlyweds decided to have a special wedding inspired by the Pioneer Organization of the Soviet Union.

The bride and the groom were wearing pioneer ties, while their guests were marching to the tunes of pioneer songs.

There was a tribune upholstered in red velvet and many images of Vladimir Lenin on the walls of the restaurant, where the wedding banquet took place.

Communist Style, the waiters and waitresses

O o..were dressed like canteen duty pioneers with red arm bands. Only the newlyweds and the host of the wedding night knew about the themed celebration.

Wwhereas all the guests were somewhat perplexed at first.The host of the party announced that the newlyweds, Elena and Mikhail, would be inducted into the Pioneer Organization.

The husband and wife put on pioneer ties and swore an oath of faithfulness. “Always ready!” was their response to every requirement of conjugal life.

The contests for guests were also prepared in pioneer style. Two teams of guests competed in arranging pioneer ties.

Afterwards, they were collected waster paper, which was a very popular occupation for pioneers during the times of the Soviet Union.

The winners received badges and pins with images of Vladimir Lenin on them. 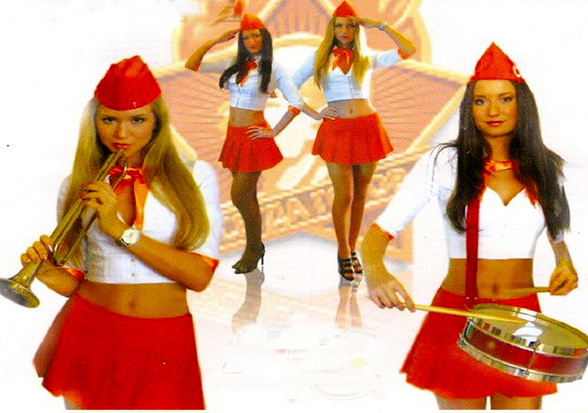 The newlyweds were thrilled about their own wedding party. They spent a very small amount of money to make all the pioneer merchandise. They purchased red fabric for ties and arm bands and made everything themselves.

The price on a themed wedding starts at $1000 at event-making companies.