Google Inc. is giving 2 million books in its digital library a chance to be reincarnated as paperbacks.

As part of a deal announced Thursday, Google is opening up part of its index to the maker of a high-speed publishing machine that can manufacture a paperback-bound book of about 300 pages in under five minutes.

The new service is an acknowledgment by the Internet search leader that not everyone wants their books served up on a computer or an electronic reader like those made by Amazon.com Inc. and Sony Inc.

The “Espresso Book Machine” has been around for several years already, but it figures to become a hotter commodity now that it has access to so many books scanned from some of the world’s largest libraries.

And On Demand Books, the Espresso’s maker, potentially could get access to even more hard-to-find books if Google wins court approval of a class-action settlement giving it the right to sell out-of-print books.

“This is a seminal event for us,” said Dane Neller, On Demand Books’ chief executive, as he oversaw a demonstration of the Espresso Book Machine Wednesday at Google’s Mountain View, Calif. headquarters. 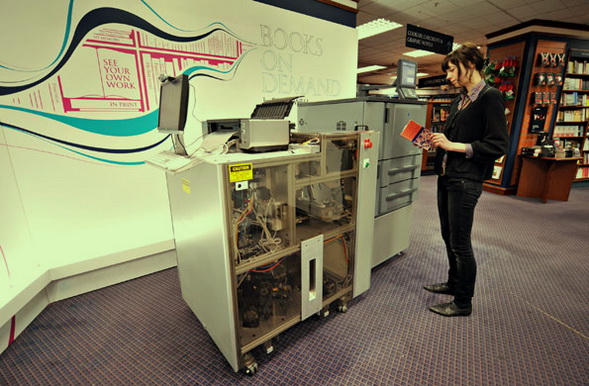 In the background, some of the books that Google spent the past five years scanning into a digital format were returning to their paper origins.

“This will allow people to pick up the physical copy of a book even if there may be just one or two other copies in some library in this country, or maybe it’s not even available in this country at all.”

On Demand’s printing machines already are in more than a dozen locations in the United States, Canada, Australia, England and Egypt, mostly at campus book stores, libraries and small retailers.

The Harvard Book Store will be among the first already equipped an instant-publishing machine to have access to Google’s digital library.

The books published by The Espresso Machine will have a recommended sales price of $8 per copy, although the final decision will be left to each retailer.

New York-based On Demand Books will get a $1 of each sale with another buck going to Google, which says it will donate its commission to charities and other nonprofit causes.

The high-speed publishing machine itself sells for about $100,000, although On Demand Books is willing to lease the equipment to retailers instead.

For starters, Google is only allowing The Espresso Machine publish from the section of its digital library that consists of 2 million books no longer protected by copyright.

These “public domain” books were published before 1923 — an era that includes classics like “Moby Dick” and “Adventures of Huckleberry Finn” as well as very obscure titles.

The paperbacks churned out in Wednesday’s demonstration of the Espresso included “Lathe Work For Beginners,” “Dame Curtsey’s Book of Candy Making,” and “Memoirs of A Cavalier,” a Daniel Defoe novel that never caught on quite like his most famous work, “Robinson Crusoe.”

Millions more titles could be added to On Demand’s virtual inventory if Google gets federal court approval of a class-action settlement that would grant it the right to sell copyrighted books no longer being published.

Google estimates it already has made digital copies of about 6 million out-of-print books.

The settlement terms includes a provision that could authorize republishing the books with a machine like the Espresso.

Some of Google rivals and a long list of other critics are hoping to block the settlement, mainly because they believe it will give Google a monopoly on the digital rights to out-of-print books and make it too easy to track people’s reading preferences.

The U.S. Justice Department is investigating the monopoly allegations and is scheduled to share some of its preliminary thoughts with U.S. District Judge Denny Chin in a brief due Friday.

Neller of On Demand Books is thrilled just to have the right to publish selections from Google’s digital library of public domain books.

Neller thinks it could help him reach his ambition to turn the Espresso machine into the book industry’s equivalent of an automated teller machine.