What many don’t realize is the fact that European Jews are descendants of European Gentiles who converted to Judaism in the Middle Ages.

During the Middle Ages many Europeans converted to Judaism and Islam. That is why there are substantial European Muslims in Eastern European countries today.

Anyone, of any race or ethnicity, can become a Jew. Being a Jew has to do with religion, not race.

We know that in the Old Testament both Ruth (a Moabite Gentile) and Rahab (a Canaanite Gentile) became Jews and were even in the ancestry of our Lord and Savior Jesus Christ.

The Israelites (Jews in Palestine) during the time of Christ did not have White European complexion and features. In their writings, ancient Roman historians give descriptions of ancient Jews and none of those descriptions fit with European Jews look like. Most Israeli Jews are of European racial stock.

What are we to think of the modern nation of Israel?

The best way for Israel to stop terrorist attacks in its territory is by first ceasing its occupation of all Arab lands and the continual, unrestrained building of Jewish settlements in the West Bank.

In 1967 Israel went to war in self-defense and captured Arab land. Israel was right in defending itself. However, the issue now is no longer so much self-defense.

The problem is that Israel will not pull back to its pre-1967 borders so long as many Israelis and most evangelical Christians in America continue to believe that present day Jews have a biblical right to all of Arab territory in Palestine.

For this reason a biblical examination of the issue is necessary.

As an evangelical and conservative Christian, of Indian origin, I wish to set the biblical issue in proper perspective.

Although the modern state of Israel now has every right to exist as any other nation (as long as it honors the UN resolutions upholding Palestinian rights) this does not mean that Zionism (the belief that Jews have a biblical right to all of Palestine) is correct.

And it is Zionism that is primarily fueling the building and expansion of illegal Israeli settlements on Arab land.

From a purely biblical perspective Zionism has enormous problems.

The fact is that almost none of the Jews in modern Israel are descendants of the original Jews of Palestine thousands of years ago.

As was already mentioned, most of the Jews in Israel today are descendants of Europeans who had converted to Judaism in the Middle Ages (known as Khazar or Ashkenazi Jews).

The last time God had promised in the scriptures to bring the Jews back to their ancestral homeland was fulfilled centuries ago when He brought them back from their Babylonian captivity.

Thus, the Jews in present-day modern Israel are not a fulfillment of that ancient promise.

We read in the Book of Joshua 21:43, 45: -And the Lord gave unto Israel all the land which He sware to give unto their fathers; and they possessed it, and dwelt therein. There failed not ought of any good thing which the Lord had spoken unto the house of Israel.

All came to pass…. Thus, there is no promise concerning the land that still awaits any fulfillment.

Most evangelical Christians today are looking forward to the seven-year tribulation period of Israel which would require for the Jews to be in the land. But this period had already occurred in history during AD63 to AD70. (seven years) when the Roman army besieged and destroyed Jerusalem and the Jewish Temple. 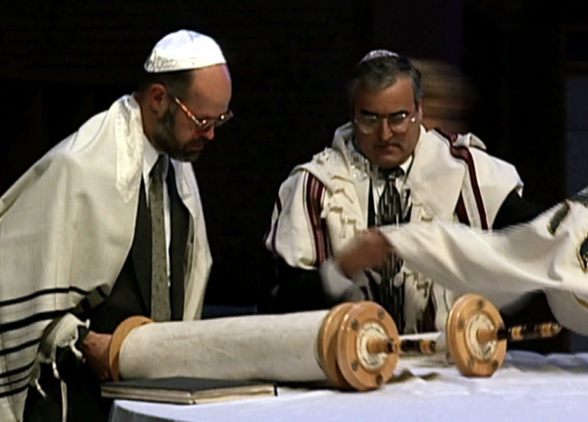 It was this destruction that Jesus said would mark the end of the age (the Jewish Age, that is). During these seven years, there was a brief respite from the attacking Roman army and this respite gave an opportunity for believing Jews (Christians) of this time to escape the final destruction of Jerusalem and have their lives spared.

Most evangelical Christians, who are dispensationalists, are still seeking for an Israel that the New Testament says is the spiritual body of Christ made up of both Jew and Gentile believers in Jesus Christ and who together (as one seed) inherit the same (not different) promises (Galatians 3:14-16).

The New Testament refers to the Christian church as the “Israel of God” (Galatians 6:16).

There is good reason to believe that some of the Old Testament descriptions of God’s future dealings with Israel are already being fulfilled spiritually in and through the Christian church which is made up of both Jew and Gentile believers in Christ inheriting the same (not different) promises.

The problem with most evangelical Christians today is that they interpret the Book of Revelation literally. But Revelation is a book of symbolism and should not to be interpreted literally. The Book itself tells us not to interpret it literally.

In the very first verse of the very first chapter we read, “The revelation of Jesus Christ, which God (the Father) gave unto Him, to show unto His servants things which must shortly come to pass.

He sent and signified it by His angel unto His servant John” (Revelation 1:1, KJV).

The word “signified” in the passage comes from a Greek word meaning “signs” or “symbols”. Thus, Revelation was meant by Christ to be interpreted symbolically, not literally.

The Book of Revelation, like the rest of the New Testament, was originally written in Greek so sometimes we must go to the Greek language to have a more precise understanding of certain words.

Many evangelical Christians believe (wrongly) that the “Great City” in the Book of Revelation, which God destroys in His wrath and which is referred to figuratively as Babylon, is Rome. They believe it is Rome because the city is described as being surrounded by seven hills.

However, Jerusalem, also, is surrounded by seven hills. The proof that Jerusalem is the city and not Rome is found in Revelation 11:8 where we read, “And their dead bodies shall lie in the street of the great city, which spiritually is called Sodom and Egypt, where also our Lord was crucified”.

Was the Lord crucified in Rome or in Jerusalem?

The wrath of God against Jerusalem for its apostate Judaism is what the early portions of the Book of Revelation are all about.

The modern state of Israel, now that it has been established, has every right to exist, but Israel should also be made to uphold the UN resolutions concerning Palestinian inalienable rights.

Unlike before, almost all Arabs, including Palestinians, now recognize Israel’s right to exist or, at least, will not wage war with Israel if Israel completely withdraws to its pre-1967 borders. But, what Palestinians and other Arabs cannot live with is Israel’s continued occupation of the West Bank and Israel’s continued building of settlements there.

It is important, however, to have some basic background knowledge of how the modern state of Israel was founded.

As one writer points out: “Israel was created (in the beginning) not by force of arms or military invasion, but terrorist activity advocated by Jewish immigrants, in an effort to get rid of the British Administration (the lawful government of the day, as sanctioned by the predecessor to the UN). Britain abandoned its mandate and Israel was created by the UN.”

Any solution to the present crisis must also involve monetary or financial compensation being made by Israel to Palestinian families who have had their homes and lands seized and taken away during the formation of the modern state of Israel in the 1940’s. (According to the UN resolution 194, Palestinian refugees have the right for compensation and repatriation).

During that time Palestinian families suffered huge atrocities at the hands of Jewish immigrants, including many pregnant Palestinian Arab women having their wombs ripped open and their babies slaughtered before their very eyes.

This was one of the many horrible crimes committed against Palestinians, even by such notable political figures as former Prime Minister of Israel Menachem Begin, and the Palestinians should be compensated by the modern state of Israel for these crimes. That is only right.

However, as long as most evangelical Christians in America believe modern Zionism is biblical they will continue to exert one-sided pressure in Washington DC in support of Israel’s status quo in the region and prevent any pressure on Israel to pull back to its pre-1967 borders and discontinue building settlements on Arab land.

That is why it is very important to understand that there is no biblical basis for modern Zionism.

If America insists Israel must be fair to Palestinians it will not only help achieve peace in the Middle East but also will reduce Muslim extremism, and even terrorism, against the United States.
By Babu G. Ranganathan