Rehearsals for the Eurovision Song Contest kicked off at the Olimpiisky Sports Complex on Sunday, the first official day in the run-up to the competition, which begins May 12.
The stadium, which was built for the 1980 Olympics, has undergone a transformation, including what organizers promise is the most expensive Eurovision stage ever. The circular stage is surrounded by electronic screens for spectacular lighting effects, and high-tech disco balls hang from the ceiling.
“This is the most impressive stage I’ve ever seen. It’s fantastic,” Sweden’s entrant, Malena Ernman, said after her rehearsal.

There were a few teething problems evident on Sunday. Media representatives complained that they had to wait up to three hours for accreditation in an unclear procedure, and the stage director for Belarussian contestant Petr Elfimov hissed that projectors for a video backdrop weren’t ready on time.
This week will see intensive rehearsals by semifinal contestants. Countries with byes to the final round – Russia, France, Britain, Germany and Spain – will have their first rehearsal on Saturday. Organizers have put together a spacious media area, equipped with hundreds of computers, that would not look out of place at a prestigious international conference. Except, of course, for details such as the “no icream” sign at the entrance and scattered beanbags.
Elfimov of Belarus was one of the first performers to take the stage Sunday, performing a rock ballad called “Eyes that Never Lie.”
His rehearsal was jinxed by a technical problem, his Polish stage director, Janusz Jozefowicz, complained at a news conference, saying that a video projector failed to materialize.
The bleached-blond Elfimov confided after the rehearsal that he plans to wear his “lucky leather suit” for the show. He warbled in Belarussian at a reporter’s request and even attempted to get the news conference involved in a mass singalong, although no one could hit the high notes.
The Belarussian delegation handed out free ice cream with Elfimov’s grinning face on the wrappers. The treats proved popular, possibly because the on-site cafe was charging 150 rubles ($4.50) for a tiny salmon sandwich.
Swedish contestant Ernman performed a song called “La Voix” in a dramatic cream dress decorated with ostrich feathers. A well-known opera singer, she described herself as a “pop virgin” at the news conference.
Sunday’s audience included media representatives from France, Germany, Denmark, Turkey and Australia. They included devoted fans who have attended as many as 20 Eurovision contests.
Hassan Yusuf, editor of a British Eurovision fan magazine called Vision, said he’s attended seven competitions, although he started watching the contest back in the late 1960s. He’s backing the British entrant, Jade. “It’s my favorite since 1970,” he said. “I hope it’s going to do really, really well.”
About 50 fans from the British branch of an international network devoted to Eurovision will travel to Moscow for the contest, Yusuf said. He will spend two weeks in Moscow and estimates that it will cost him ? ($3,000).
“It’s an expensive hobby,” he said.
themoscowtimes 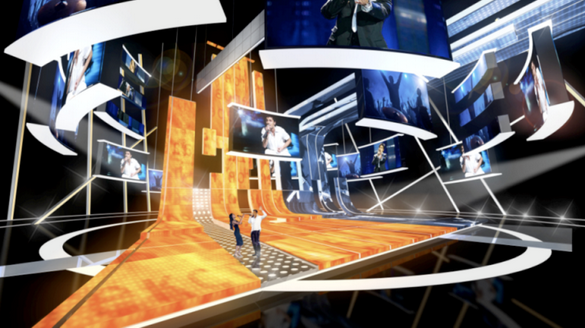 Georgia has decided to pull out of the Moscow Eurovision Song Contest after the contest organiser, the European Broadcasting Union, offered Georgia to either re-write its song lyrics or to submit another song. “We will not go to Moscow and will not take part in Eurovision 2009,” said Natia Uznadze, a producer of Georgian public television, who is responsible for Georgia’s Eurovision entry.