Two American journalists held captive in North Korea since March endured meals of rice with rocks, more than four months of isolation and the constant fear they would be sent to a gulag.
Facing sentences of 12 years hard labor, they were allowed only sporadic contact with each other, let alone the outside world. Then, suddenly this week, they were brought into a meeting with none other than Bill Clinton, who helped win their release and flew home with them for a tearful reunion with their families. 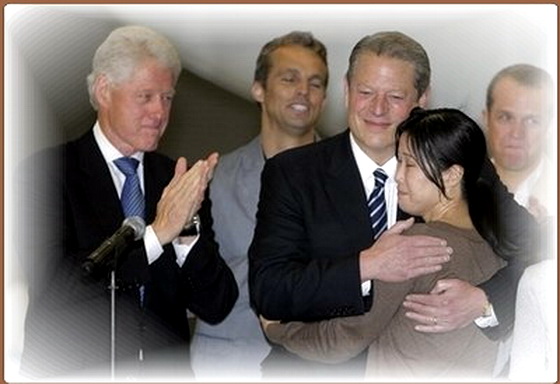 “We could feel your love all the way in North Korea,” an emotional Laura Ling said. “It is what kept us going in the darkest of hours and it is what sustained our faith that we would come home.”
Ling and Euna Lee sobbed and embraced their husbands and Lee’s 4-year-old daughter, Hana, in the sleek hangar of a Burbank airport after a 9 1/2-hour flight from Japan. It was the last stop following their release from North Korea after an unusual diplomatic rescue mission headed by the former president.
In a voice shaking with sobs, Ling recalled how their time in captivity came to an abrupt end after she and Lee were summoned to a meeting and found the former president standing there.
“We were shocked but we knew instantly in our hearts that the nightmare of our lives was finally coming to an end, and now we stand here, home and free,” she said.
While questions swirled about the delicate negotiating dance that led to their release, Ling only talked about their gratitude to be free and their desire to quietly get reacquainted with their families.
Neither woman offered details of their treatment in North Korea, which has a reputation for a brutal government and has struggled through famine. But Ling’s sister later told reporters that her sister was “a little bit weak” and it would take some time for her to gather her wits and speak about her captivity.
Family members found it challenging to hear the few details they have received, she added.
She said the captives saw each other for only a couple days after their detention.
“They actually were kept apart most of the time. … On the day of their trial, they hugged each other and that was it,” Lisa Ling said outside her sister’s home in the San Fernando Valley of Los Angeles.
She said the family had four telephone conversations with her sister during her captivity. During one of them, Laura Ling asked them to write to Lee “and tell her that I’m thinking about her and I love her.”
Lisa Ling said her sister was craving fresh food and a sushi dinner will be on the agenda soon.
“She’s really, really anxious to have fresh fruit and fresh food. … There were rocks in her rice,” Lisa Ling said. “Obviously, it’s a country that has a lot of economic problems.”
They were held in a guest house and had not yet been sent to the labor camp because of medical concerns, the sister said. Laura Ling suffers from an ulcer, while Lee has lost 15 pounds since being detained. Ling had been seen regularly by a doctor, her sister said.
Ling, 32, and Lee, 36, are reporters for former Vice President Al Gore’s San Francisco-based Current TV. They had been working on a story about the trafficking of women when they were arrested in March, and sentenced to 12 years of hard labor for illegally entering North Korea. The pair were granted a pardon Tuesday, following talks between Clinton and North Korea leader Kim Jong Il.
They arrived at Bob Hope Airport at dawn aboard a Boeing jet owned by Steve Bing, a multimillion-dollar film producer, friend of Clinton’s and contributor to Democratic causes.
Lee, who emerged first, wept and hugged her daughter, held her hands as she talked to her and then scooped her up. Both were crushed in an embrace from her husband, Michael Saldate.
Ling threw up her arms in joy before descending the plane’s stairs and embracing her husband.
“Thirty hours ago, Euna Lee and I were prisoners in North Korea,” she said in prepared remarks on behalf of both women. “We feared that any moment we could be sent to a hard labor camp.”
Clinton was hugged by Gore as he stepped off the plane. He didn’t speak, but his office later issued a statement saying he was happy the long ordeal was over.
“Hana’s been a great girl while you were gone,” Gore told Lee. “And Laura, your mom’s been making your special soup for two days now.”
He also thanked the State Department for its help in the release.
“It speaks well of our country that when two American citizens are in harm’s way, that so many people will just put things aside and just go to work to make sure that this has had a happy ending,” he said.
The release amounted to a successful diplomatic foray for the former president, who traveled as an unofficial envoy, with approval and coordination from the administration of President Barack Obama. The visit to Pyongyang came at a time of heightened tensions over North Korea’s nuclear program.
The meeting appeared aimed at dispelling persistent questions about the health of the authoritarian North Korean leader, who was said to be suffering from chronic diabetes and heart disease before reportedly suffering a stroke last August. It was Kim’s first meeting with a prominent Western figure since the reported stroke.
Ling’s sister said her family “had a sense that the government had agreed to send President Clinton” but didn’t know whether the release was predetermined before his arrival.
White House press secretary Robert Gibbs said Clinton will brief Obama’s national security team on what transpired in Pyongyang.
He reiterated that Clinton did not carry a message from Obama to Kim.
“If there wasn’t a message, there certainly couldn’t have been an apology,” Gibbs said.