Georgia has pulled out of the 2009 Eurovision song contest, due to be held in Moscow, the head of the country’s national competition said on Wednesday. The European Broadcasting Union (EBU) officially informed Georgia on Tuesday that its entry did not comply with the rules of the competition, which do not permit “lyrics, speeches, gestures of a political or similar nature.” The group Stephane & 3G were chosen to represent Georgia in Moscow with a song entitled We Don’t Wanna Put In, a clear reference to Russian Prime Minister Vladimir Putin. “The group refuses to change the lyrics,” said Natia Uznadze, who was in charge of the competition that chose the country’s entry. Georgia’s official letter to the event’s context executive director said: “Georgia’s public broadcaster does not intend to rewrite the lyrics and refuses to take part in the Eurovision song contest. The broadcaster does not agree with your decision and believes it to be ungrounded.” Georgia said the song had no political context. However, the group earlier admitted their song was a protest against Russia’s policies. Meanwhile, Eurovision official Jarmo Siim told RIA Novosti by phone from the Estonian capital of Tallinn that the organizing committee had not received an official notification from Georgia and could not comment. “We have not received any official withdrawal notification. As soon as we get it, we will post it on our website,” he said. Relations between the two ex-Soviet states have been strained under pro-Western leader Mikheil Saakashvili. They plunged to their lowest last August when Georgia attacked South Ossetia to regain control of the region and Russia retaliated with a counteroffensive. Moscow later recognized Georgia’s two breakaway provinces as independent states. Georgia could either rewrite the lyrics of the song or choose another entry. The deadline for participating countries is March 16. The South Caucasus state’s culture minister accused Russia on Wednesday of pressurizing the contest organizers. “I am sure Eurovision officials were subject to an unprecedented pressure from Russia,” Nikoloz Rurua told the Imedi channel. Moscow won the right to host the event for the first time after Russian pop singer Dima Bilan took first place in last year’s Eurovision, held in Belgrade, with his song Believe. Georgia’s entry is the first time a former Soviet republic has attempted to mock Russia on the Eurovision stage. Last year, Ukraine’s Andrei Danilko, who cross-dresses as an overly busty woman with the stage name Verka Serduchka, sang Lasha Mumbai, but intentionally slurred the words so that viewers heard “Russia Good-bye!”
en.rian.ru 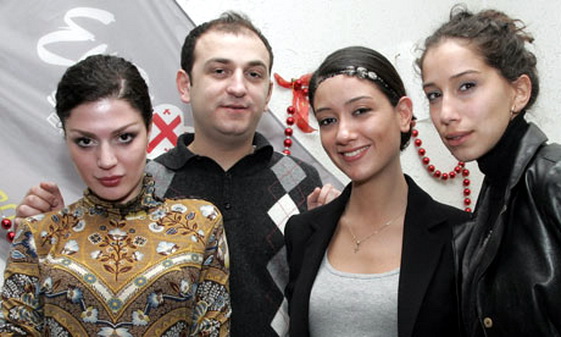 One thought on “Georgia,refuses to change the lyrics.”