Police made at least nine arrests, including six people suspected of looting a shop. Seven officers were injured along with two demonstrators.

The uniforms of several riot police officers were set ablaze by firebombs. One of the policemen hopped over a metal railing as other officers stood over him extinguishing the flames. A state television van was set on fire and badly damaged.

Hundreds of youths rioted in Athens on Saturday, throwing Molotov cocktails and stones at police who responded with tear gas at a May Day rally against austerity measures being enacted by the cash-strapped government to secure foreign loans to stave off bankruptcy

In Athens, groups of black-clad anarchists in hoods and motorcycle helmets smashed three shop and hotel windows and set up barricades of burning trash bins. Around 17,000 people took part in the march, according to police estimates.

Leftist and anarchist demonstrators heckled and threw plastic water bottles at former parliamentary speaker Apostolos Kaklamanis, a governing Socialist lawmaker, after spotting him among pedestrians on the sidelines of the Athens march. Kaklamanis, 73, was hit and kicked but suffered no major injuries and was eventually whisked away by police.

The center-left government is set to announce more sweeping spending cuts through 2012 to win support for an international loan package worth euro45 billion ($60 billion) this year alone. The Cabinet meets Sunday morning to finalize the measures, with Finance Minister George Papaconstantinou expected to announce them at noon and then immediately fly to Brussels for an emergency meeting of euro-zone finance ministers. 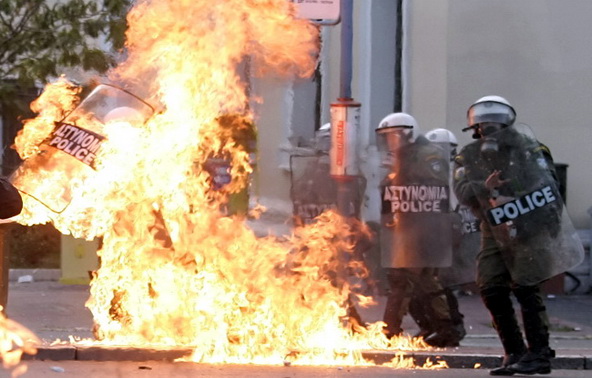 The International Monetary Fund has said it will provide the money over three years, along with Greece’s partners in the euro zone. IMF and EU negotiators began talks in Athens on April 21 and continued through Friday.

French Finance Minister Christine Lagarde said Saturday after a meeting of French government officials that she was confident euro-zone finance ministers would approve the package by the end of the weekend. Governments are discussing a package of up to euro120 billion ($159 billion) over three years, she said.

In March, Athens announced belt-tightening measures aimed to save some euro4.8 billion this year through cuts in civil service pay, higher indirect taxes and a crackdown on widespread tax evasion. But these proved insufficient, and additional austerity measures will likely include further hikes in consumer taxes, and deeper cuts in pensions and public service pay. Unions are furious.

“These measures are death. How people are going to live tomorrow, how they’re going to survive, I do not understand,” said Nikos Diamantopoulos, who was participating in a rally organized by pro-Communist unions.

Union members held a peaceful march to the Athens offices of the European Union and continuing to the U.S. Embassy.

In the northern Greek city of Thessaloniki, where more than 5,000 people demonstrated, anarchists briefly clashed with police and smashed a few storefronts and ATMs.

Greek unions have called a nationwide general strike for May 5. 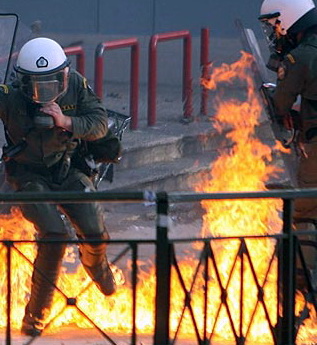 but are seen as likely to support the package of measures. Left-wing parties have vowed to escalate protests.

“The Greek people do not owe anything to anybody. Those who have brazenly robbed public money and pension funds,” Left Coalition leader Alexis Tsipras told reporters at one of the Athens rallies.

“They’re trying to do away with all the rights we gained through struggles in previous years,” she told The Associated Press.

A default would be a serious blow to the euro currency and could hit Greek and European banks that invested in Greek government bonds. The bailout is designed to prevent that and to keep the Greek crisis from spreading to other countries that use the euro.

German Chancellor Angela Merkel said Berlin is pushing for changes to the rules governing the euro zone, including the possibility of suspending voting rights for nations that do not uphold their commitments.

Merkel told the Bild am Sonntag weekly in comments released Saturday that European Union finance minister would meet in May to discuss implementing changes to the bylaws for membership in the 16-nation euro zone.

The chancellor said the common currency had been one of the greatest European success stories, but that changes were needed to ensure its stability.

Greece spent freely for years and ran up debt equal to 115 percent of gross domestic product. It has been effectively shut out of bond markets to refinance its debt pile because investors fear default and are demanding high rates of interest the government says it cannot pay.

Signs that the help will soon be approved have calmed markets, which previously pushed Greece’s cost of borrowing to untenably high levels high as EU and German officials showed little urgency in addressing the problem.

On Friday the interest rate gap, or spread, between Greek 10-year bonds and their benchmark German equivalent narrowed to 6.20 percentage points, from a staggering 10 points Wednesday.

Moody’s said the banks’ might face further downgrades — a move that would come alongside Moody’s ongoing review of the country’s sovereign debt rating.

On Thursday, the agency confirmed that it is awaiting to see details of an EU-IMF rescue package before a possible revision of Greece’s credit rating, but that a “multi-notch downgrade” remained likely.

May 5 — Bloomberg’s Nicole Itano reports from Athens where protesters have clashed with riot police.
Greek air-traffic controllers and teachers walked off their jobs and shopkeepers shuttered their stores to challenge Prime Minister George Papandreous latest decision to cut wages and pensions and raise taxes in return for a 110 billion-euro ($143 billion) rescue package. Today’s general strike is the third this year.

Iraq about misconduct of the American army (video)

KISS – And we don’t apologize for it…