“Harry Potter and the Half-Blood Prince” will fly into theaters worldwide on Wednesday July 15 as excited fans await the release of the highly anticipated 6th film in the series.

There has been much debate about how director David Yates has omitted some parts of the book, and has added other scenes.

Diehard fans of the book are unhappy about that, with comments echoing those of 15-year-old Ella Thorold “My gripe is that the film was simply too different from the book – the writers inserted pointless scenes and took out others crucial to the narrative.” 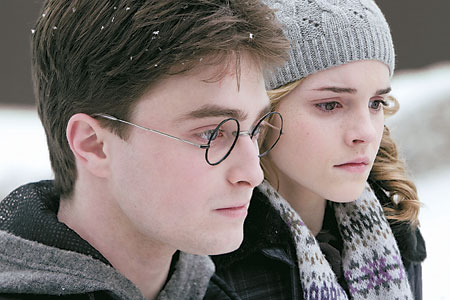 But aside from that and the feeling that there is too much romance, “Half-Blood Prince” promises to bring fans plenty of excitement and grim magic scenes. As teenage hormones gush, the three central characters that fans have grown up with, Harry (Daniel Radcliffe) and Hermione (Emma Watson) and Ron (Rupert Grint), become involved in relationships that get sorted in the course of the movie.

It does have a lot of the familiar elements from previous films – Hogwarts Express, Quidditch, Marauder’s Map, exploding potions, and Dumbledore; Lord Voldemort returns and dark forces lurk beyond the enchanted gates of Hogwarts School. But there are interesting differences too.

Some of the characters get to do more than before, and there is a new addition, Jim Broadbent as the dotty Potions Professor with a dark streak. The film has received different ratings in the US and UK.

Lucky screeners of the Motion Picture Association of America (MPAA) and the British Board of Film Classification (BBFC) were able to get a sneak preview.

The MPAA awarded the film a ‘PG’ rating, for “scary images, some violence, language and mild sensuality”. It does not disallow anyone from seeing the film, but is meant to caution parents against letting younger children attend the film.

On the other hand, BBFC gave it a 12A classification due to its “moderate threat” and “mild language”, meaning an adult must accompany those under 12 in order for them to see the film.

It would be interesting to see how the movie ratings change as the main characters mature. The stars are already filming the final two installments in the series.

The seventh and last book, Deathly Hollows, will be released as not one but two feature films, and the sixth film, like the sixth book, seems to be setting up stage for the grand finale in 2010/11.