HMMD Competitions has announced the winners of its Triple Bridge Waterfront design competition. Which called for designs to transform the Liepaja Canal coastline into a leisure avenue in Liepaja, Latvia.

In their submissions, designers thus had to include a “restaurant/café, nightclub/bar.  Exhibition space/conference hall, and an unprescribed tourist attraction.”

Entrants were additionally asked to consider the relationship between modern and historic developments and influences, as well as sustainable growth.

“Successful entries to the competition were refined, yet nimble to accommodate a vast site flanked by historic building and exposure to a canal.”

The winners of the competition are

The winning entry is differentiated by clarity of organization and singularity of form. The proposal is characterized by a single datum responsible for structuring program, site, and public experience.

Analogized to a table, this datum establishes relationships between regularly distributed, formal and informal functions.  On top of, below, and around itself.

Bounded by the street and waterfront, the table establishes a line against which the city and waterfront are measured. Altogether, the solution is comprehensive, systematic, and radically straightforward.

Program prescribed in the brief is articulated through legible geometric forms, regularly set across the table. The space between allows for flexible, incidental activity.

It is perhaps within these spaces that the proposal is most profound.

Sectioned between formal geometry and function, the space between allows for provisional public, and for that matter private use.  Civic, commercial, intimate, social, or recreational — with little to no obstruction.

Elevated above the table, the space serves as a public terrace; and below as an open, shaded lawn. The solution is flexible for both permanent and temporary use.

In a similar way, the project is structured to be phased over time across the site, from one pavilion to another. As with the additional leafs of an expandable table, the proposal can further expand as required.

The promise in the second place entry is twofold. First in the use of the arch as a versatile, systematic, and monumental form for organizing public space.

The material system of the arch is flexible.

It can be rendered as a heavy mass or a light frame, as both an enclosed or open space. The arch way defines space linearly as a barrel vault, at intersections as a groin vault. In each case, though, it maintains formal autonomy.

The versatility within this system organizes the site for diverse public functions, adapting material and enclosure as required.

The restaurant for example is conceived as a dining room.  Described as an outdoor space covered by suggested enclosure through a wireframe structure. The space is distinguished by a domestic dining room table,stretched in length to fit exceptionally more people.

The placement of what would normally be thought of as accoutrements for domestic and private activity, with noninstitutional programs in such monumental forms results in the monumentalization of intimate social activity. In effect, the proposal personalizes public space. 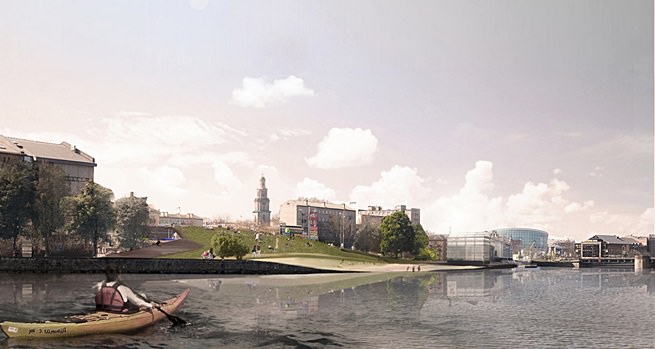 The third place project unifies the diverse forces of the site through programmed landscape. The project employs a clear design strategy mediating between the formal fabric of the city and informal edge of the waterfront.

The civic plaza is strategically set at the edge of the site, adjacent to the flanking street and city edge, while the civic park emerges from natural slope rising from the waterfront.

The plaza and park are stitched by the required public program between them. The result is a programmed landscape blending the fabric of the city and the water.

Liepaja, third largest city in Latvia and the biggest city in Kurzeme, just like the majority of the Baltic cities, has an immense historical, industrial and state significance.

The city, where the wind is born has been the most important non-freezing port in the region and has managed to be a capital of Latvia. But first things first.

The first mentions of the settlement date back to the 13th century and since then has been a prominent entrepot for travelers and merchants.

Since the 15th century, a trade route between Amsterdam and Moscow was established through Liepaja.  Which was back then called Liva Portus, and with time the amount of transported cargo has only increased. In the beginning of the 20th century it was the starting point for the steamships that headed for New-York.

Among other infrastructural achievements of Liepaja are the development of the telegraphic connection between Russia and Denmark and first city trams in the Baltics.

Of course, the main significance in the history of Latvia Liepaja got from the status of the capital of Latvia, when the temporary government was held on the “Saratov” steamship that was stationed in the port of Liepaja.

The amazing history of this city is evident even today – Liepaja is the center of the region in all areas, that’s why one can clearly say that this broadcast will always have something to look at.

Liepaja, I love You!