Madden NFL . EA promises that the new title will usher in a new era with advancements that make it as realistic as what fans see on Sunday TV minus the grass stains.
“The Tiburon team couldn’t be more excited about Madden NFL 10,” said Phil Frazier, Senior Producer. “With online innovation that will connect Madden fans together like never before, an immersive broadcast presentation that captures the suspense and emotion of the NFL, and the most authentic gameplay to date, Madden NFL 10 will be the pinnacle in the award-winning franchise.”
Madden NFL 10 gives players more control over the play allowing them to push defenders towards the first down marker, fight for a fumble at the bottom of a pile, or avoid a rush by stepping into the pocket.
New animation technology allows players to fight for every yard. Madden NFL franchise will be available on the Xbox 360® video game system from Microsoft, PlayStation®2 and PLAYSTATION®3 computer entertainment systems, PSP® and well with a version designed just for the Wii console. The game will have a special draft event on April 25th with live call ins from players and by April 24th the unveiling of the featured sports cover.
Read Madded NFL 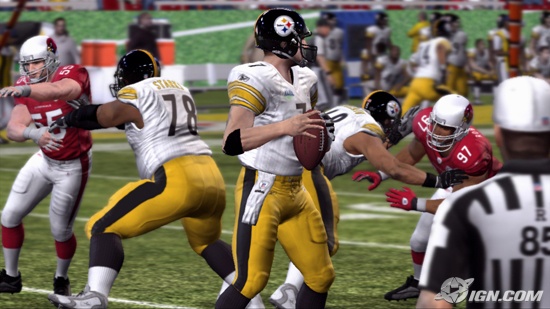