U.S. President Barack Obama declared on Friday a state of emergency for New York state as Hurricane Irene is approaching the U.S. East Coast, threatening to wreak massive havoc on its path.

The declaration mandates the coordination of disaster relief efforts among federal agencies, including the Homeland Security Department and the Federal Emergency Management Agency, which will provide federal emergency aid to the New York state.

The federal agencies will specifically help the counties of Bronx, Kings, New York, Queens, Richmond, Nassau and Suffolk to carry out future relief efforts in the wake of the hurricane.

Irene, estimated to threaten over 65 million residents living along the East Coast, is expected to hit the New York City and Long Island on Sunday. Authorities have warned that the “historic” hurricane could bring massive flooding, power outages and property damages on its path.

Earlier Friday, the New York City issued a hurricane warning, the first since 1985, ordering about 300,000 residents along the coastal area to evacuate ahead of Irene’s arrival.

Hurricane warnings have been issued along a stretch of the East Coast from North Carolina in the south to New England to the north. State of emergency have already been declared in seven states, including North Carolina, Maryland, Virginia and New Jersey, with several coastal cities ordered to be evacuated. 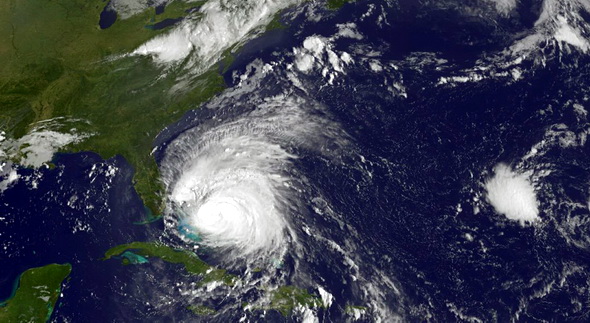 As of Friday afternoon, Irene was causing heavy rain, high wind and rough seas along the coast of North Carolina.

Obama cut short his vacation in Martha’s Vineyard off the coast of Massachusetts on Friday to return to Washington a day ahead of schedule, to deal with the emergency situation related to Hurricane Irene.

The White House made the announcement shortly after Obama issued a statement from his vacation site, calling on residents on the East Coast living in the projected path of Hurricane Irene to take it “seriously,” and get prepared in advance of the “historic” storm.

Obama convened a conference call Friday morning and was briefed by Napolitano, Fugate, White House Chief of Staff Bill Daley and other senior administration officials about the preparations for Hurricane Irene.

“In this emergency I am activating all levels of state government to prepare for any situation that may be caused by Hurricane Irene,” Cuomo said in a statement obtained by the New York Daily News. “We are communicating with our federal and local partners to track the storm and to plan a coordinated response, and we will deploy resources as needed to the areas expected to be hit the hardest. I urge New Yorkers to personally prepare for hurricane conditions and to cooperate with emergency officials if needed.”

Hurricane Irene: 7 Things To Protect Yourself

One thought on “New York Gov. has declared a state of emergency as Irene nears.”