Pope Benedict XVI’s Christmas Eve Mass at St. Peter’s Basilica got off to a tumultuous start Thursday after an apparently deranged woman jumped the barriers and knocked him down on his way to the altar.

In his homily, delivered unflappably after the incident, Benedict urged the world to “wake up” from selfishness and petty affairs, and find time for God and spiritual matters.

The 82-year-old pope was unhurt after his fall, said a Vatican spokesman, the Rev. Ciro Benedettini.

Earlier, in Bethlehem, thousands of pilgrims from around the world descended on the traditional birthplace of Jesus, for the most upbeat Christmas celebrations the Palestinian town has seen in years.

While the Holy Land’s top Roman Catholic clergyman reminded followers that peace remains elusive, while the threat of sectarian violence in the Islamic world and the lava spilling from a volcano in the Philippines clouded the celebrations for other Christian communities across the globe.

Footage from the Vatican aired on Italy’s RAI state TV showed a woman dressed in a red, hooded sweat shirt vaulting over the wooden barriers and rushing toward the pope before being swarmed by bodyguards.

Video shot by a witness showed the woman grabbing the pope’s vestments as she was taken down, with Benedict seemingly falling on top of her.

The commotion happened as the pope’s procession was making its way toward the main altar and shocked gasps rang out through the public that packed the basilica. The procession came to a halt and security rushed to the trouble spot.

Benedettini said the woman who pushed the pope appeared to be mentally unstable and had been arrested by Vatican police. He said she also knocked down Cardinal Roger Etchegaray, who was taken to hospital for a check up.

“During the procession an unstable person jumped a barrier and knocked down the Holy Father,” Benedettini told The Associated Press by telephone. “(The pope) quickly got up and continued the procession.” 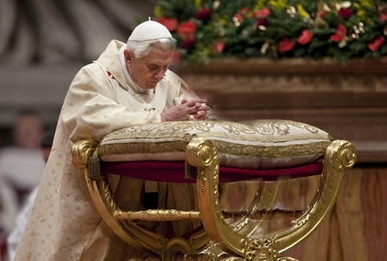 In Bethlehem, residents hemmed in by an Israeli security barrier and still recovering from years of violence, celebrated their town’s annual day in the spotlight along with pilgrims and tourists. Visitors milled around Manger Square, mingling with clergymen, camera crews and locals hawking food and trinkets.

Christmas in Bethlehem has its incongruous elements — the troops of Palestinian boy scouts who wear kilts and play bagpipes in one of the town’s holiday traditions, for example, or the inflatable Santa Clauses hanging from church pillars and storefronts looking out of place and overdressed in this Middle Eastern town with not a snowflake in sight.

Hanna Pioli, 23, and her sister Katherine, 25, were spending the holiday far from their hometown of Salt Lake City, Utah.

The sisters miss celebrating a “white Christmas” at home and were taken aback by the warm weather, Katherine Pioli said, but still thought Bethlehem was the best place for Christians to spend this day.

Jeffrey Lynch, 36, a sanitation worker from New York City, was taking a tour through the Church of the Nativity, the fourth-century Crusader era structure built atop the grottos that mark the spot believed to be the birthplace of Jesus.

“It’s a miracle being here on Christmas Eve. It’s a lifetime opportunity. I wish everybody could be here,” he said.

But the Holy Land’s top Roman Catholic cleric, Latin Patriarch Fouad Twal, reminded listeners in a holiday address that peace remains out of reach. “The wish that we most want, we most hope for, is not coming. We want peace,” Twal said after he passed into Bethlehem in a traditional holiday procession from nearby Jerusalem.

Twal and his convoy of dozens of vehicles entered Palestinian-controlled territory through a massive steel gate in Israel’s heavily guarded West Bank separation barrier, escorted by Israeli soldiers and police in jeeps.

The barrier and the heavy Israeli security presence served as reminders of the friction and hostilities that have thwarted peace efforts.

Only hours later, an Israeli man was shot and killed in the West Bank in an attack by Palestinian gunmen. Such attacks, once common, have become rare in recent years as the West Bank has regained a semblance of normalcy.

The Israeli military identified the man as a resident of a nearby settlement, and a little-known Palestinian faction took responsibility in an e-mail sent to journalists.

Some Christians in other far-flung parts of the world also saw gloom edge out the holiday cheer.

On Thursday, explosions killed at least 26 people across Iraq, most of them Shiite pilgrims. The blasts raised fears of further sectarian attacks at the approach of Ashoura, when Shiites mark a period of mourning and self-flagellation for the Prophet Muhammad’s grandson.

At least one Catholic archbishop has discouraged Christmas decorations and public merrymaking out of respect for Shiites. “We used to put the Christmas tree with its bright lights close to the window in the entrance of our home,” said Saad Matti, a 51-year-old surgeon and Basra city councilman. “But this year, we put it away from the window as a kind of respect for the feelings of Shiite Muslims in our neighborhood because of Ashoura.”

In Baghdad, a marble palace once occupied by Saddam Hussein housed an impromptu Christmas celebration for US soldiers and others far from home.

“I have mixed emotions,” said Lt. Col Timothy Bedsole, 52, an Army chaplain from Alabama who was marking his second Christmas in Iraq since the 2003 invasion. “It’s a very happy time for us as Christians and a very sad time to be away from our families.”

The Christians say they have received cell phone text messages warning them to expect a “special Christmas present.” They’re terrified their tents will be torched or their church services bombed.

“Last year I celebrated Christmas full of joy,” said Irfan Masih, cradling his young son among the canvas shelters and open ditches of the camp. But now “the fear that we may again be attacked is in our hearts.”

Far to the east, in the shadow of the erupting Mayon volcano in the Philippines, thousands of families were spending Christmas Eve in shelters as the volcano belched out 20 gray ash columns Thursday, some of them a mile (1.5 kilometers) high.

Government workers and volunteers tried to keep some 47,000 displaced residents entertained with games, movies and concerts, a heavy burden during the Christmas season in this majority Roman Catholic country.

Noodles, fruit and corned beef were distributed at the shelters for Christmas Eve dinner. Children in one evacuation center gleefully lined up for ice cream.