More than 8,000 troops are taking part in the manoeuvres near the Georgian border, which Georgia has called “a pure provocation from Russia.”
Last month Nato angered Russia by staging exercises in Georgia itself.
Although NATO and Russia have just agreed to resume military ties, analysts say the latest exercises are a clear warning from Moscow to the West. 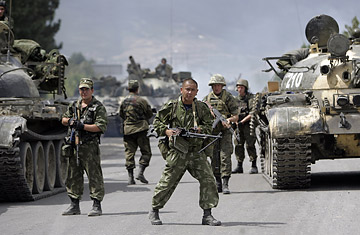 Military experts in Moscow say the message is that the Caucasus is still part of Russia’s sphere of influence, says the BBCs correspondent in Moscow, Rupert Wingfield-Hayes.
The war games are due to end on the day US President Barack Obama arrives in Moscow for a summit with Russian President Dmitry Medvedev.
Military sources are also quoted as saying the exercises would help to “cool down the fantasies of some warmongers,” in a clear reference to Georgian President Mikhail Saakashvili, whom Moscow blames for starting last year’s war, says our correspondent.
Tensions in the region are still high: Russia maintains heavy military presences in Georgia’s two breakaway regions of South Ossetia and Abkhazia and has recognised them as independent.
The United Nations and the Organisation for Security and Co-operation in Europe (OSCE) are about to pull their monitors out of Georgia because Russia has blocked any renewal of their mandates to work in the region.
Twenty OSCE military monitors, who have been conducting patrols near South Ossetia, made their last tour on Friday.
Meanwhile 130 UN observers who have been monitoring the administrative boundary between Abkhazia and Georgia will leave in the next three months.
The OSCE’s head of mission, Terhi Hakala, warns that people in the region feel vulnerable. “The villages close to the border line are still insecure and people feel frightened. During the night there is still shooting going on, sometimes even looting going on,” she told the BBC.
The International Crisis Group last week warned that the pullout by the UN and OSCE would fuel tensions.
It also pointed out that Russia had yet to honour its side of the August ceasefire agreement by withdrawing its troops back to their pre-war positions.