The 19th Expedition crew to the International Space Station (ISS) will blast off on board a Soyuz carrier rocket on Thursday from the Baikonur space center in Kazakhstan, a Russian Mission Control spokesman said. Lift off is scheduled for 2:47 p.m. Moscow time [10:47 GMT]. The Soyuz TMA-14 spacecraft is due to dock with the ISS on Saturday.
The new crew of Commander Gennady Padalka from Russia, NASA astronaut Michael Barratt and space tourist billionaire Charles Simonyi will join Japan’s Koichi Wakata, U.S. astronaut Michael Fincke and Russian Flight Engineer Yury Lonchakov. Wakata replaced U.S. astronaut Sandra Magnus, who left the ISS on Wednesday on board the Discovery space shuttle following a four-month tour of duty.
This will be Hungarian-born Simonyi’s second trip into space at a cost of around $35 million, up from the $25 million he paid for his 2007 visit. Padalka and Barratt will remain on the ISS for six months, and Simonyi will be on board for ten days before returning to Earth on April 7 with Fincke and Lonchakov. By the end of May, the ISS will be constantly manned by six astronauts.
The space station proves 2 things. One is that cooperation and friendly relations are possible and desirable if positive things are to be accomplished.
The second is that the Russian space program is healthy, vibrant and totally reliable. It has been the only reliable method of delivery of supplies and personnel to the ISS.
Earth bound persons could learn from the space travelers about friendly cooperation, enduring long periods of deprivation and overcoming any challenge. Space is for peace and Russia leads the way! Always good to see the crew change-over. Someone goes home and someone starts an adventure. 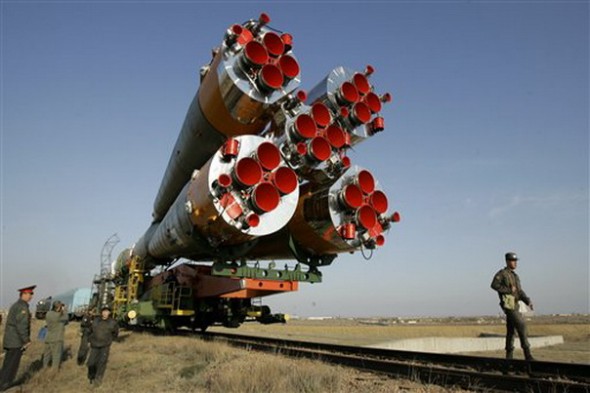