Space shuttle Atlantis landed at Edwards Air Force Base in California on Sunday morning after a successful mission to repair and upgrade the Hubble Space Telescope.(24.may)
Weather conditions forced flight controllers to pass up the shuttle’s first landing opportunity at Kennedy Space Center in Florida, NASA said.
Thunderstorms had prevented the Atlantis from returning to its Florida home base for the third day in a row.
The shuttle, STS-125, arrived at the Hubble Space Telescope at the International Space Station on May 13. During the fifth and final space shuttle servicing mission to the Hubble Space Telescope, Atlantis’ seven astronauts performed five spacewalks on five consecutive days to repair and upgrade the telescope, according to NASA.
The crew repaired two instruments, installed two new ones and three New Outer Blanket Layers (NOBLs), and replaced all six batteries and gyroscopes, and one Fine Guidance Sensor, said NASA, which described the mission as “highly successful.”
The upgrade would leave the telescope better than ever and ready for another five years, or more, of research, said NAS.
“Congratulations to all on a wonderful mission,” NASA said.
Conditions were favorable at Edwards Air Force Base when the space shuttle landed, NASA’s TV footage showed.
Landing at Edwards Air Force Base would cost NASA two million dollars to get the shuttle back to Kennedy Space Center in Florida, and the transportation would take a week, according to NASA. 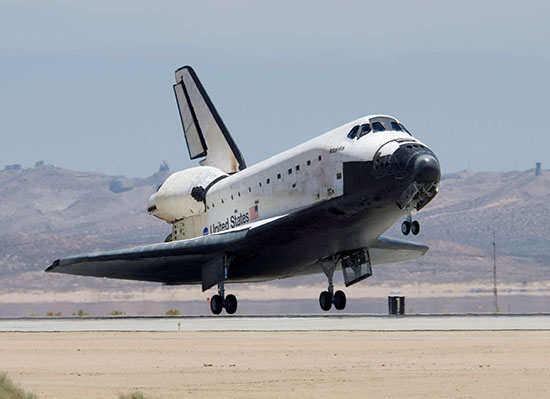