According to the latest UN estimations, the world population owns nearly 500 million units of small and light arms purchased illegally.

Western countries, developing countries and Russia are alarmed with this statistics.

There are many human tragedies hidden behind clandestine weapons.

Often, such weapons are sold at the places of recent war actions or near them. In this respect, Russia is still reaping the fruits of the last year’s war in the Caucasus.

According to Valery Fedorov, First Deputy Chairman of the Federation Council in Constitutional Legislation, there are hundreds of tons of explosives, small weapons, and Stinger and Igla missile-rounds “wandering” around the world.

Gennady Gudkov, the deputy chairman of the Duma’s security committee, estimated that compared to 1990s, there is less weapons in the market, and they are getting more expensive. “Today, a TT sells for approximately 2.5 thousand dollars.

Fifteen years ago its price was only $15, and famous Beretta weapons were only $25. However, today the price depends on a region, and the regions with recent war actions have cheaper weapons,” he explained.

For example, cheap revolvers can be found in the Krasnodar Territory because after the 5-day war with Georgia last year, residents of Abkhazia and Russia were exposed to dozens of thousands of weapons.

A few days after the war, a large part of these weapons could be purchased in Kuban.

According to an informed source, personal weapons of Georgian officers used to sell for 50 thousand rubles apiece, while after the conflict the price dropped to 10 – 15 thousand. The M4 carbine and other foreign weapons were sold for pennies on the dollar. Yet, Kalashnikovs did not lose in price significantly. Illegal weapons trade continues to grow in Kuban.

In neighboring Dagestan, local craftsmen re-make gas guns into weapons and sell them all over Russia. Local police found nearly 60 thousand of these guns. Less than two weeks ago, employees of the Dagestan Ministry of Internal Affairs found six hand-built guns with mufflers, a TT-type gun, four Nagan revolvers, a Margolina pistol, a submachine gun, and an 8 mm foreign-built gun in the house of a 41-year-old man.

Illegal mass-produced weapons come to Russia mainly from the West. Former socialistic countries suffer from illegal imports as well. For example, in Poland, according to statistics, 3.5 people out of a thousand are entitled to carry weapons. This is the lowest number in the EU . For comparison, in Czech Republic this number is almost ten times higher, and in Germany – six times higher.

Yet, Poland has more crimes committed with the use of firearms than its neighbors. Specialists believe it has something to do with a strong criminal market being fed by the Baltic countries and a “green” border with Ukraine that allows weapons transportation.

Besides, Poland has many weapons left from the Soviets who hastily left Poland in 1989. In that general “mess,” military equipment was sold to locals on a mass scale and weapons were popular goods. Some of these weapons migrated to other countries, but many still remain in Poland and continue to kill. 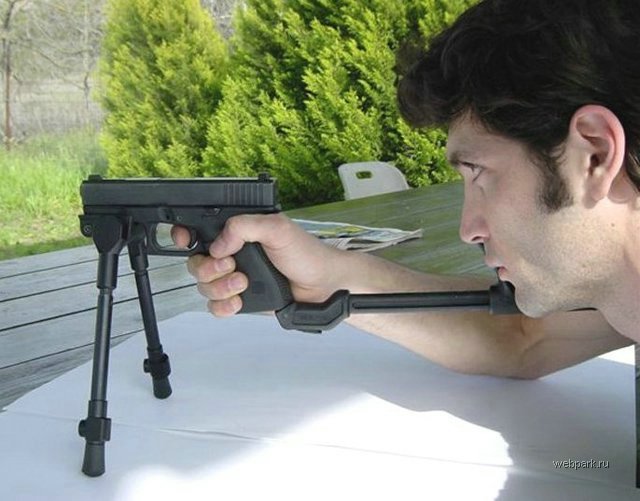 Chicago, the criminal capital of the USA, is not lagging behind either. Last year, for example, a half of 13.658 thousand of weapons confiscated last year were semi-automatic and latest automatic weapons officially called “offensive weapons.”

This week, the FBI stated that the black market became the main supply source for gangsters. In California alone, FBI agents confiscated almost 30 thousand weapons, including automatic ones.