According to accumulating research, the beloved family dog is really a toddler with a snout and tail.

Dogs basically have the developmental abilities equivalent to a human 2-year-old.

The average dog can learn 165 words, although “super dog” Rico, a border collie, could understand 200 spoken words. Experts think some dogs can learn up to 250 words.

Family dogs can count up to four or five and can correct you if you can’t add one plus one.
One dog apparently learned to “read.”

Coren recounted the case of the canine who was able to “deliver” mail addressed to two girls, one with a short name and one with a long name.

Although the owner thought the dog was actually reading, it turns out the canine was gauging the length of the name, not the individual characters, enabling him to deliver the mail to the right person.

eds of dog differ in their intelligence, with border collies topping the list for working (instinctive) and obedience intelligence.

“There are two extreme viewpoints when we talk about dogs,” said Coren, professor emeritus of psychology at the University of British Columbia in Vancouver and author of numerous books on dogs including How to Speak Dog and How Dogs Think.

My little beagle would then be a beagle-shaped bag, a biological equivalent of transistors and gears. The truth of the matter is somewhere in between.” 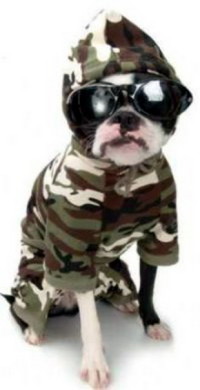 More and more, scientists are realizing that dogs can think and solve problems in ways previously thought to belong only to humans and higher primates.

Indeed, one recent study also found that dogs were like 24-month-old children, at least when it comes to figuring out where humans have hidden a treat.

Like 2-year-olds, family dogs can experience fear, anger, happiness and disgust (perhaps at a human’s sub-par math skills), but not guilt. Humans don’t feel guilt until about age 4, Coren said.

Dogs apparently can ponder the meaning of “dog,” in a way. According to Coren, they do have a consciousness of self, though not as complex as that of humans.

They also recognize differences among beings and are cognizant of others’ variable viewpoints and talents.
And they dream, as demonstrated through movements they make while they’re asleep.

Dogs can figure out how to get to the couch before you do and how to operate a latch or other simple mechanism.

They can also deceive other dogs.

Not to mention people.

Coren has both a beagle (ranked seventh from the bottom in obedience intelligence) and a cat. The cat is fed on the counter so the beagle can’t interfere with feline meal-time.

One time, though, the beagle started scrabbling around, digging at the kitchen floor. “I was quite confused,” Coren recalls. “He looked around and continued again, then he looked up at me.

I finally got down on my hands and knees and he immediately jumped onto my back and onto the counter. He decided his psychologist father could be used as a ladder.”

“This presentation asks and answers some very deep questions about if, and then how, dogs might think,” said Bonnie Beaver, a professor in the department of small animal clinical sciences at the College of Veterinary Medicine & Biomedical Sciences at Texas A&M University.

Serious students of dogs are advised to go back to original studies, lovers of dogs should view this with interest and leave a little room for doubts.

But, there is always the possibility that generalizations do not quite fit the data or that the original data may have been weak.