This is not future…

That the authorities Moldova and opposition leaders agreed late Tuesday to a recount of votes cast in Sunday’s parliamentary election, which was easily won by Voronin’s Communist Party.
Voronin said in a television address late Tuesday that opposition leaders had embarked on a “path to the violent seizure of power.”
“Everything that they have undertaken in the last 24 hours cannot be described as anything other than a coup d’etat,” Voronin said, referring to opposition leaders.
He said the authorities “would resolutely defend the state against the leaders of the pogrom.”
President Dmitry Medvedev has already congratulated Voronin on his party’s election win, and the Foreign Ministry said Russia was deeply concerned by the events in Moldova.
“We are following the situation with concern,” Deputy Foreign Minister Grigory Karasin said, Interfax reported.
About 10,000 demonstrators massed for a second day in the capital of Europe’s poorest country to denounce the vote as rigged. They hurled computers into the street while police took cover behind riot shields.
Moldovan state television said one young woman choked to death from carbon monoxide poisoning in the parliament building.
It cited a senior doctor at Chisinau emergency hospital as saying 34 other protesters had been injured, including two in a serious condition in hospital. Some 80 police officers also received treatment for injuries, it said.
Opposition leaders called for a halt to the protests and said they were pressing for a recount of all votes cast.
Official results put the Communists in front with close to 50 percent of the vote. The parliament elects the president, and the Communists appeared very close to securing the 61 seats they need in the 101-seat assembly to secure victory for their chosen candidate.
Most of the protesters are students who see no future if Communists keep their hold on the former Soviet republic of 4 million people — located on the European Union’s border but within what Russia sees as its sphere of influence.
The leaders of three opposition parties that won seats in parliament spoke to reporters after emerging from talks with Moldova’s president and prime minister in the aftermath of protests that caused serious damage to government buildings.
“We must stop this violence,” Dorin Chirtoaca, leader of the Liberal Party and mayor of Chisinau, said. “We must secure the right to a recount of all the votes. And we demanded the right to stage peaceful protests.”
Vlad Filat of the Liberal Democrats said the opposition, which stands broadly for closer ties with neighboring Romania, was demanding the right to check all electoral lists.
“As a result of this, I can assure you that the elections were rigged and we will organize a new election.”
Protesters overwhelmed riot police protecting both the president’s office and the parliament — located opposite each other on the capital Chisinau’s main boulevard — and poured into both buildings through smashed windows. They heaped tables, chairs and papers onto a bonfire outside parliament, and fires could also be seen in some of the building’s windows.
Police were forced to retreat in disarray from attacks by protesters hurling stones and other projectiles.
They withdrew beneath riot shields as demonstrators pushed them from their positions. Some demonstrators were seen chasing police away after seizing truncheons and riot shields.
“The election was controlled by the Communists, they bought everyone off,” said Alexei, a student. “We will have no future under the Communists because they just think of themselves.”
Voronin has overseen stability and growth since 2001, but he has been unable to resolve an 18-year-old separatist rebellion in the Russian-speaking region of Transdnestr, where Russia has had troops since Soviet times.
Moldova is one of six former Soviet states with which the EU is due to launch a new program of enhanced ties at a summit in Prague next month.
EU foreign policy chief Javier Solana called on all sides to show restraint Tuesday.
“I call on all sides to refrain from violence and provocation. Violence against government buildings is unacceptable,” he said in a statement. 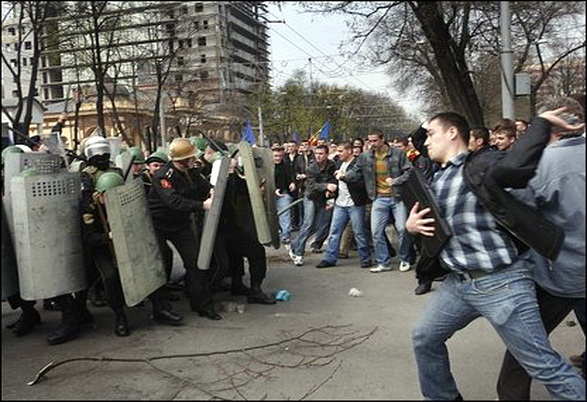 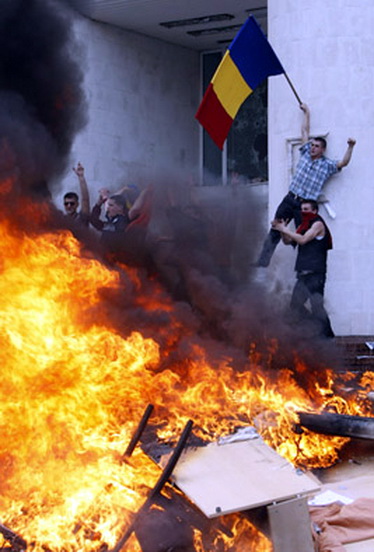