Moscow and the Moscow region found themselves in the middle of a natural disaster on Wednesday night (June 3).
“It was terrible, but it was dazzling. I looked out of the window and saw a huge funnel that was swirling in the forest on the outskirts of the town. I got scared, but then I thought that it was so beautiful. I told my husband to come to the window to look at the twister. All of a sudden, the funnel started moving towards us. The wind was lifting cars and small garages in the air, overturning garbage cans. The trees were cracking into parts like matches,” Galina Starchenko, a resident of the town of Krasnozavodsk in the Moscow region said.

The wind felled over a hundred trees, overturned several bus stops and tore off the roofs of 40 buildings. Over 60 people suffered various injures, 25 of them were hospitalized. 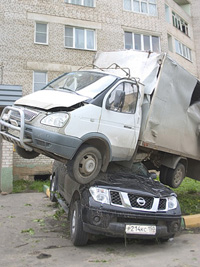 A 12-year-old boy was killed when a tree fell down on him. The boy was going to a sports competition at school, which no one canceled despite the weather conditions.

The strong wind tore about 90 trees by the roots in Moscow. Several of them crashed onto cars.

The storm occurred when the warm air collided with the cold cyclone from the Baltic Sea. The sharp contrast between the warm ground and the cold air, as well as pressure falls produced the effect that people witnessed: abrupt winds, rainfalls and thunderstorms. Squall winds will occur in Moscow many times during this summer. If a cold cyclone replaces a heatwave, it always results in fierce storms.