USB has come a long way since the 12Mbps days of the ’90s. It has waved goodbye to USB-B and is inching away from USB-A in favor of the slim, reversible USB-C connector.

Data transfer rates have increased so dramatically that we can run powerful setups with high-resolution monitors, speedy external storage, and numerous other devices from the USB Implementers Forum’s latest open standard, USB4.

Adding features like dynamic bandwidth allocation ensures that USB 4 is by far the most advanced USB generation. While there are PCs, docks, and cables supporting USB 4, we’ve yet to see everything the protocol can do, like powering an eGPU without Intel branding.

With all that going on, we thought it would be a great time to put a spotlight on the latest and greatest generation of USB.

We’ve whipped up a handy refresher for all things USB4.

Breaking down the various key aspects of the spec, from how it differs from other specs to protocol tunneling, Alt Mode, and power delivery.

USB4 is compatible with USB 2.0 and 3.2 and can support Thunderbolt 3 and 4. Remember that you’ll get the lowest data transfer rate available. For example, if you plug a USB 4 40Gbps cable into a USB 3.2 Gen 1 port on your laptop, expect the cable to work at 5Gbps.

USB4 differs from USB 3.2 in that it can operate at 40Gbps; however, that max theoretical transfer rate is optional. At a minimum, USB4 requires 20Gbps, just like USB 3.2 Gen 2×2.

USB4 also introduces the ability to use multiple data and display protocols simultaneously and allocate total available bandwidth based on current needs.

USB4 must operate at 20Gbps, but it can also support 40Gbps speeds using a pair of bidirectional cable lanes.

According to the USB-IF’s specification for USB Type-C (2.1), all of a computer’s downward-facing USB-C ports must support DisplayPort Alt Mode for it to be USB4-certified.

To be a true USB 4 dock, the spec also calls for all downward-facing USB-C ports to support DisplayPort Alt Mode. This wasn’t a requirement for prior USB generations. 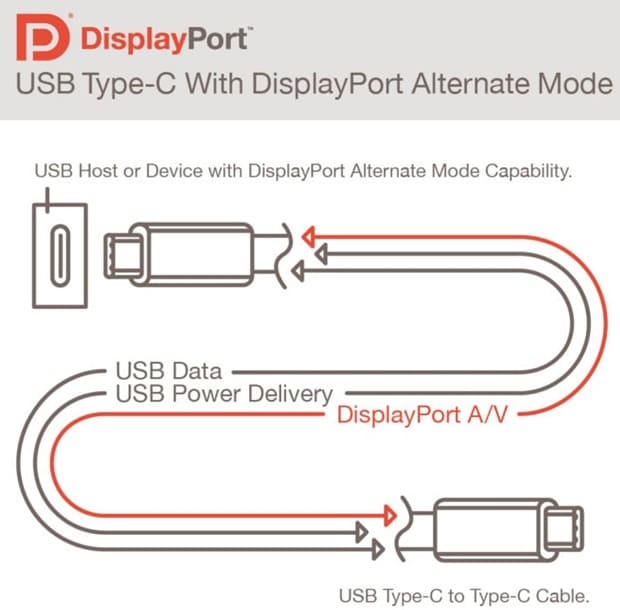 “defines the use of the high-speed interface signals over the USB Type-C connector differently than USB 4, and, in some configurations. DisplayPort Alt Mode can support higher than 40Gbps, depending on the mode in which it is operating.”

By taking over both pairs of bidirectional lanes (four lanes total), VESA says DisplayPort 2.0 Alt Mode can operate at up to 80Gbps.