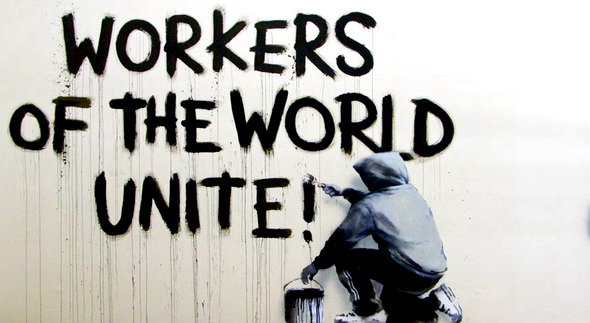 “The real significance of the euro is now becoming clear: just as there are no national economies anymore, there is no national solution to the crisis facing workers in Greece, Spain, Portugal or anywhere else. They are forced into a common struggle against global capital. “Workers of the world unite!” never sounded so apt. And a mini-oracle to Goldman, Sachs, Klinz and Issing: Take your next winter holiday in sunny, profligate Greece at your peril.”

Two million people took to the streets of Athens last week in the country’s second general strike this month, protesting the austerity measures proposed by their socialist government. All of Greece came to a 24-hour standstill and the airport was closed as a result of the action. The only public transport was the commuter train so that protesters could reach the demonstration.

The crisis broke last autumn after Prime Minister George Papandreous took office and discovered the country was bankrupt. The conservative government had cheated to get into the European Union Eurozone in 2001, cooking the books. What on paper — creative accounting courtesy of Goldman Sachs — was a budget deficit of 3 per cent and public debt 60 per cent of GDP, by 2009 had ballooned to 13 per cent and 125 per cent.

Initially, the EU tried to finesse the issue, declaring solidarity with Greece. But the financial sharks are sharpening their teeth, smelling blood. Their response to the Greek problem is naturally to rush to profit from it. Greece’s “credit rating” has already been lowered, meaning any new bonds will carry a much higher price tag for the government (read: people).

That of course makes it all the harder for Greece (read: the people) to actually pay the bankers. And when the country defaults, the EU will be forced to cough up in any case. Win, win for the fat cats. What EU leaders meant by solidarity was not that they were going to pour public money into Greece, as they have been pouring into their banks over the past year and a half, but that they intended to squeeze the money “owed” the banks out of the Greek people, relying on IMF oracles.

The European Parliament, the democratic facade for this, is really just the mouthpiece for the austerity seekers. Chairman of the EP Special Committee on the Economic and Financial Crisis Wolf Klinz has called for a commissar to be sent to make sure the Greeks deliver the required pound of flesh.

But who did the fiddling in the first place?

The EU statistics agency Eurostat says that in 2001, Goldman Sachs secretly helped the right-wing Greek government meet EU membership criteria by masking the extent of public deficit and national debt. Once in Euroland, Greek consumers naively snapped up slick German goods and let their own industry atrophy. Now the debt trap is closing.

The traditional way out would be to devalue the drachma, in order to cut imports and stimulate exports, distributing the overall burden of adjustment to the nation as a whole — rich and poor. But there is no drachma anymore. Bound to the euro, Greece can neither stimulate its domestic market nor export successfully.

Poverty appears to be the only solution. Or, at the suggestion of Josef Schlarmann, a senior member of the German Christian Democratic Party, sell off its islands and antiquities — presumably to rich German bankers. Greeks still resent as their brutal WWII occupiers, and this clumsy faux pas has already set off a campaign to boycott German goods.

Whatever paper is used to cover the cracks, the outlook for Greece — and the EU — remains grim, because France and Germany are merely adding to their own liabilities while not reducing Greece’s, and Greece will be quite unable to cut its deficit by the requisite 10 percentage points of GDP.

The very fabric of the European Union is being torn asunder as the rich members turn their backs on the poor. The iron law of capitalism — the strong protect their own interests at the expense of the weak — is once again being played out. Squeeze the workers. Communist propaganda, you might say, but unfortunately true.

In an ideal Europe, workers in Germany would come to the aid of workers in Greece by demanding a radical revision of economic policy, making the banks sovereign and the bankers civil servants, building a real social democracy. The reality is quite different. The Greek financial crisis exposes the absence of any real community spirit in the EU. The solidarity declared by EU members is a solidarity of businessmen.

The EU now has an ersatz ideology of internationalism, rejecting the nation state as the source of all evil, cultivating “a pompous pride in Europe as the centre of human rights, giver of moral lessons to the world, which happens to fit in perfectly with its subservience to US imperial foreign policy in the Middle East and beyond,” according to Diana Johnstone, author of Fools Crusade: Yugoslavia, NATO and Western Delusions. In this cosy Euro brotherhood, Greece is portrayed as a picturesque Third World country, living the Aesopian carefree life of the cricket to the Germans’ ant. The likes of Portugal, Italy, Ireland, Greece and Spain are affectionately dubbed PIGS, a chilling throwback to Orwell’s Animal Farm. 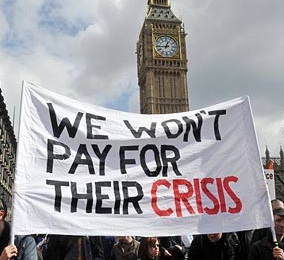 But the storm clouds now gathering are not just over Greece; the entire western world is still very much in fiscal crisis. The investment bank Societe Generale recently published a frightening estimate of the real liabilities of Western governments, including off balance sheet debts. In every case the numbers, including unfunded pension fund liabilities, dwarf the official debt position.

Greece is by far the worst because of what Otmar Issing, the German former chief economist of the European Central Bank, described with German tact as “one of the most luxurious pension systems in the world.” Its total net liabilities are 800 per cent of GDP – eight times the official position. For the US, it is 550, the UK 400, Germany 400, France 550, Italy 350 and Spain 250. In other words, the entire western world is insolvent and each country is facing its own day of reckoning – starting, appropriately enough, in Greece, the home of western civilisation.

Who cleans up the mess when bankers play casino capitalism and go broke?

Ninety-three per cent of the people of Iceland rejected a proposal requiring them to cover the debt of their oldest and largest bank on 6 March. Covering the debt would have cost Iceland’s 317,000 citizens around $17,000 each. Iceland’s national referendum was the first (legal) expression of the people’s will to decide who pays when the financial elite fail. Greece’s (illegal) general strikes were the first truly democratic expression of the people’s will. The sharks should take heed. When the oxygen is used up, the water turned into a cesspool, their days are numbered too. 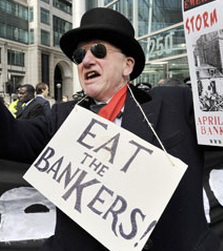 As the working class begins to wake up, it takes a page from its master’s book. It must be international. Last week saw a succession of strikes and protests throughout Europe: Lufthansa’s pilots, French air traffic controllers and oil refinery workers, protest rallies in Madrid, Barcelona and Valencia against the austerity measures of the Spanish Socialist Workers Party government.

Trade unions in the Czech Republic announced that public transport would be halted this week. A one-day general strike of the public sector in Portugal protested measures to cut the deficit to 3 per cent of GDP by 2013. A truly pan-European movement is being born. The Independent’s Sean O’Grady predicts such actions “promise to be just the start of the greatest demonstration of public unrest seen on the continent since the revolutionary fervour of 1968.”

The other lesson the workers are learning is that they must throw off their deadwood leadership. The aim of the unions is to regulate social tensions and ensure that they do not pose a threat to big business and the state. British Airways cabin crews were set to strike until their union put strike action “on hold”. The German pilots’ union, Vereinigung Cockpit, called off the strike at Lufthansa on its first day, as did the General Confederation of Labour in the strike against the oil giant Total in France. In both cases, the unions capitulated without having won any of the workers’ demands.

The most draconian cuts are being imposed by social democratic governments; in particular, the socialists in Greece, Spain and Portugal. In every instance, writes Christ Marsden, “they were elected with the support of the trade union bureaucracies, which have remained their allies as promised reforms have given way to austerity budgets.” The general strike in Greece is a sign that the corporate union leadership is being swept into action against the pseudo-socialist government by incensed workers, a portent of what will no doubt come. More communist propaganda, but unfortunately true.

A sad footnote to this is the case of the weakest new members from the ex-socialist bloc. Latvia’s 25.5 per cent plunge in GDP over the past two years is already the worst two-year drop on record ever, ahead of the Great Depression, with projections of even greater debt and the need for even greater austerity measures, as the government madly continues to pursue the euro will-o’-the-wisp. Yes, the Latvians are indeed corrupt, their post-Soviet elites stole, stripped and sold the shop to Western interests, and then transferred their ill-gotten gains abroad.

But worse yet is the outright theft carried out in broad daylight by Western banks, whose academic friends were hired to write Latvias’ tax codes and who provided easy euro-denominated credit, so when the crunch came, they could move in and take whatever was left. Why invade such countries as Greece or Latvia with armies when you have bankers?

The real significance of the euro is now becoming clear: just as there are no national economies anymore, there is no national solution to the crisis facing workers in Greece, Spain, Portugal or anywhere else. They are forced into a common struggle against global capital. “Workers of the world unite!” never sounded so apt. And a mini-oracle to Goldman, Sachs, Klinz and Issing: Take your next winter holiday in sunny, profligate Greece at your peril.
by Eric Walberg 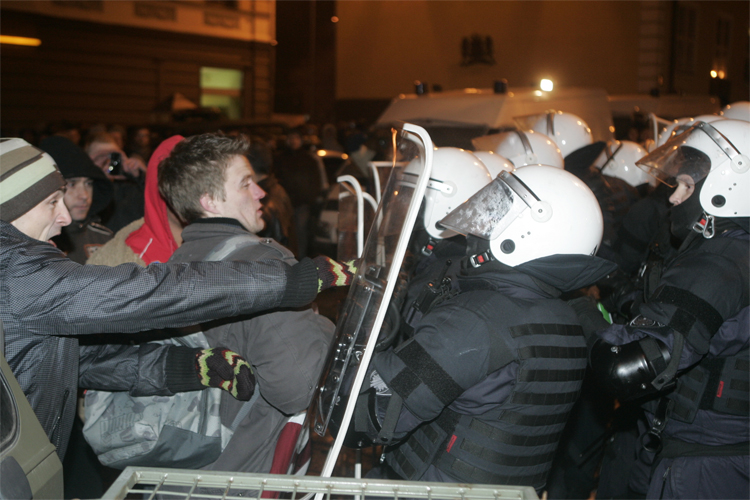